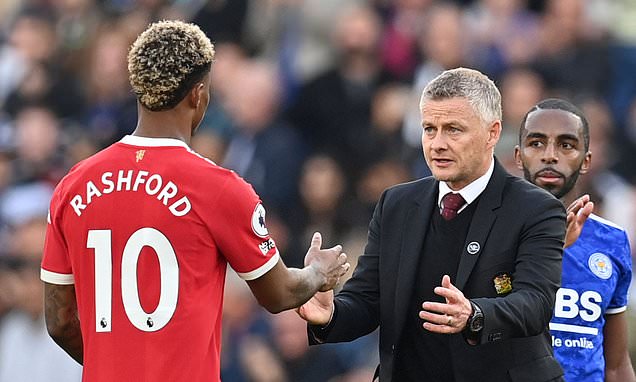 Marcus Rashford said Manchester United players 'will stick together' just as Ole Gunnar Solskjaer asked them to do when he announced he would be leaving the club.

The Norwegian was sacked last week after a shambolic 4-1 defeat at Watford left United ninth in the table, 12 points adrift of Premier League leaders Chelsea, whom they face on Sunday afternoon at Stamford Bridge.

The reversal at Vicarage Road was United's fifth in their last seven league outings and spelt the end of Solskjaer's three-year reign.

Rashford revealed spoke to the players to communicate to them he would be relieved of his duties and told urged them to have each other's back in the game against Villarreal on Tuesday.


United won 2-0 in Spain to secure qualification to the knockout stages of the Champions League and Rashford believes the performance indicated Solskjaer's message had been received.

'We were already in a difficult patch and with Ole leaving it makes things even trickier,' he told Sky Sports.

'But one of the things Ole always said to us was, "When you're on the pitch, stick together". And that performance against Villarreal was that.

'We all stuck together, we dug in deep. They're a good team and keep the ball a lot and we found a way to win the game.'

Michael Carrick took charge of the Champions League game and will continue in his caretaker role for the trip to Stamford Bridge on Sunday.

The former England international is the fourth permanent or interim manager Rashford has played under at Old Trafford and the 24-year-old admitted players 'felt guilty' at the manner of Solskjaer's departure.

'Inside you feel guilty because everybody has a role to play when you're on the pitch,' he added.

Under the Norwegian, United finished second in the Premier League to Manchester City last season when they also lost the Europa League final to Villarreal and were knocked out in the semi-final of the Carabao Cup by their cross-town rivals.

Coupled with defeats in the semi-finals of both domestic cups the previous season, Solskjaer's tenure at Old Trafford was a case of United being near-perennial nearly men.

'Ole knows he'll always be a legend of this club and the players here respect him 100 per cent,' Rashford added.

The England international was at the centre of arguably Solskjaer's greatest moment as United manager, when the Red Devils defeated PSG in the round 16 of the Champions League in 2019

'It's unfortunate that it didn't go our way as a group.

'The way it started, the position he brought us to, we were close a couple of times to winning big trophies and we always seemed to just fall short.

'If those moments go our way, we could end up with two or three trophies, maybe he'd have had more time. But it's football, things happen, and you can only move on from it. Even though it's difficult, you have to find a way to move on.'