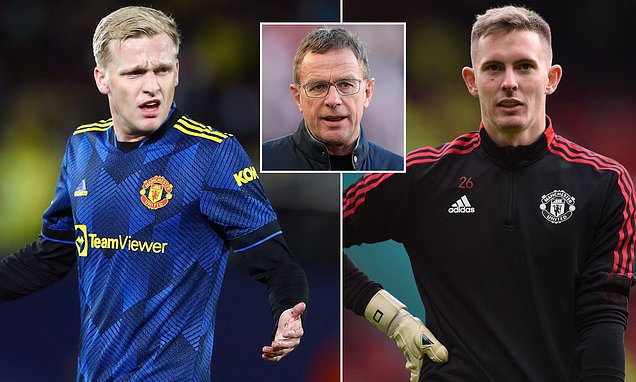 Donny van de Beek and Dean Henderson could both depart from Manchester United in January, according to reports.

Ralf Rangnick is set to be confirmed as United's new interim manager until the end of the season but he isn't expected to make many changes during his brief spell.

The German will get the opportunity to freshen up his squad during the January transfer window but will have to offload some players before bringing in new faces.

According to the Telegraph, Van de Beek and Henderson could both be moved on, with both players currently struggling to force themselves into United's starting XI.


The Dutchman has endured a difficult time since his move from Ajax last year. He is yet to start a Premier League game this season and was only recalled into the XI by Michael Carrick during their win over Vilarreal.

Similarly, Henderson is yet to start a league game. His season has been affected by Covid-19 and David de Gea's good run of form this season.

The 24-year-old looked to have got his breakthrough last season but the Spanish international has reasserted himself as the number one goalkeeper this season.

Despite rumours suggesting otherwise, Jese Lingard is expected to see out the season at United. Following his superb loan spell with West Ham last season, the 28-year-old was expected to play more regularly.

But playing time has come few and far between and Lingard is expected to leave for free at the end of the season, with the likes of Newcastle, West Ham, Everton, and AC Milan all interested in acquiring his services.

Despite those signings, United currently sit in mid-table after a horrific run of form saw them lose five in seven games, leading to Solskjaer's sacking last weekend.

Carrick will once again take charge of the side when they travel to London to take-on league leaders Chelsea on Sunday. Rangnick is expected to take charge for the first time in Thursday's game against Arsenal.