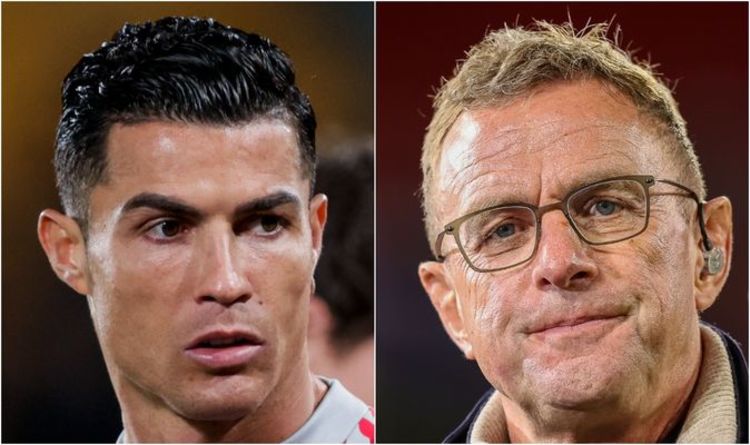 Manchester United's incoming interim boss Ralf Rangnick has been advised by Liverpool hero Graeme Souness to have a frank conversation with Cristiano Ronaldo. Although the Portuguese has been in good goal-scoring form since his summer return to Old Trafford, there is growing concern that the United team may be suffering as a result of his individual efforts.

Rangnick is set to take charge of the Red Devils after Sunday's clash with Chelsea as an agreement has reportedly been reached to leave his behind-the-scenes role at Lokomotiv Moscow.

Having someone at the helm until the end of the season should bring an aura of stability to Old Trafford, something which has been missing in recent weeks.

The final few matches of Ole Gunnar Solskjaer's tenure were hectic, and Michael Carrick has been placed in temporary charge while the search bubbled on for his replacement.

Rangnick has been deemed the chosen one, and after his six-month stint on the sidelines is over, he will supposedly transition to a consultancy role.

JUST IN: Leeds issue highlighted as 'something is not quite right' between Phillips and Bielsa

Ralf Rangnick and Cristiano Ronaldo are set to work together for the first time (Image: GETTY)

One of United's biggest assets, but also perhaps their Achilles' heel, is the importance of fan-favourite Ronaldo.

The 36-year-old has lashed in goals for fun since signing from Juventus during the summer, but United's fortunes as a whole have gone south.

Rangnick will consequently have a big decision on his hands regarding how he handles the situation, and Souness suggests a frank discussion may be in order.

"I’d have taken Cristiano Ronaldo all day long, but I’d also have had a honest conversation with him: “You’ll get plenty of game time, but you won’t be starting every game," he wrote in The Times.

That much seems curious given his 10-goal haul already this campaign, but Merson feels as though their on-field options are limited when the former Real Madrid man features up top.

"I've said it before, Man Utd are a better team without him in the team if I'm being honest," he said.

"If you want to play the way Man Utd play, what was it 28, 29 games unbeaten away from home playing attacking football with sheer pace, energy skill, they haven't got that now."