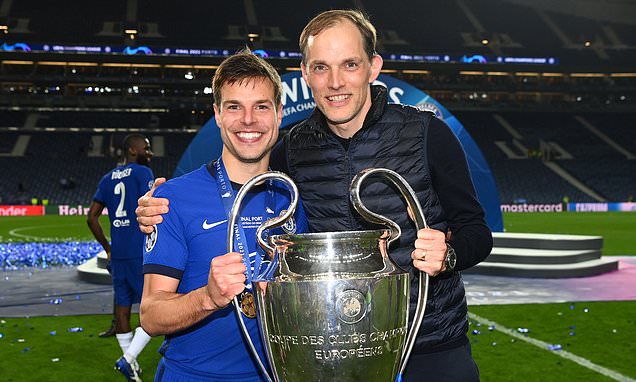 Cesar Azpilicueta believes Ralf Rangnick's arrival could swiftly turn Manchester United's fortunes around and the German could have an impact similar to Thomas Tuchel's on Chelsea.

The defeat left United 12 points adrift of league leaders Chelsea, whom they face at Stamford Bridge on Sunday afternoon.

Caretaker manager Michael Carrick will be in charge for the game against the Blues, with Rangnick set to be appointed as United's interim manager until the end of the campaign.


Chelsea know all too well the feeling of replacing a club legend halfway through the season, having replaced Frank Lampard with Tuchel in January.

'In both cases, they are playing legends and they feel the club a lot and you want the best for your club,' Azpilicueta told The Sun.

'Sometimes it works, and sometimes it doesn’t. They were not good times [when Lampard was sacked]. We were in a bad position.'

Chelsea players, Azpilicueta added, 'knew the season wasn't over' and Tuchel completely transformed the Blues, leading them to lift the Champions League and to the FA Cup final.

The Blues captain expects United will respond in similar fashion to Rangnick's arrival.

'Whether it’s an interim manager, head coach or whatever you want to call it, everybody wants to turn things around. [...] Players have their own pride,' he added.

'You want to prove yourself.'

The connection between Rangnick and Tuchel stretch beyond being appointed by two Premier League heavyweights to replace club legends mid-season.

One of the architects of Gegenpressing (counter-pressing), Rangnick's tactical approach heavily Tuchel, whom Rangnick gave his first coaching job to as Stuttgart's youth manager.

'He helped me a lot because he was my coach and then he was one of the main figures to convince me to try coaching, so he had a huge influence on all of us at this time,' the Chelsea boss said on Friday.

Jurgen Klopp, another of Rangnick's disciples, admitted his compatriot's imminent arrival was not good news for the Premier League as United would become a better team.

'Yeah, unfortunately a good coach is coming to England so that's how it is, to Manchester United,' he said.

'United will be organised on the pitch I think we should realise that and that's obviously not good news for other teams.'