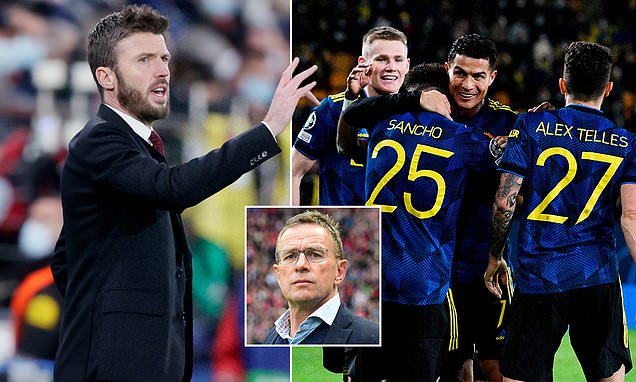 Michael Carrick has said the principles associated with Manchester United will continue regardless of who is the next manager.

Carrick, a player and coach at Old Trafford since 2006, is expected to be in charge of the team for the final time at Chelsea on Sunday before Ralf Rangnick takes over until the end of the season. It follows the sacking of club legend Ole Gunnar Solskjaer last weekend.

The arrival of 63-year-old Rangnick, who has no previous Premier League experience and won his only major trophy in 2011 with Schalke, represents a big change for United who have spent the last three years promoting their former players Solskjaer, Carrick, Mike Phelan and Darren Fletcher to key positions.

But Carrick doesn’t think the appointment of a German famed for starting the era of heavy pressing football means United have to lose their identity and become imitations of Liverpool and Chelsea.


‘The club doesn’t change. It is still Manchester United,’ said Carrick. ‘It still has a certain DNA running right through it.

‘Expectations and responsibilities are the same, playing exciting football. We are here obviously to win first and foremost but in a certain way.

‘If you look over history, there have been lots of different managers and players with different systems and ways, but there has always been this backbone to it of successful teams.

‘As a club we are fully aware of that and that’s where we obviously need to be and I’m sure we will be there soon.’

Carrick restored some pride to the club on Tuesday night by overseeing a 2-0 win away to Villarreal to book the team’s place in the Champions League knockout stages as group winners.

He concedes United are a distance behind the levels set by Manchester City, Liverpool and Chelsea in the Premier League but is adamant it’s far too early to view the season as a write-off.

‘There’s no denying (the gap). I’ve got to be realistic, it is pretty obvious from the recent run of games. But it wasn’t that long ago we finished second in the league and were on a really good curve of improvement. I don’t think that can be forgotten in terms of the potential.

‘It’s very different having a poor run of results to being a poor team. We’ve had a spell that’s not been good enough but that doesn’t mean it’s a poor team.’

‘There’s plenty left in the season, Over time, not just here but other clubs, you have bad spells and you can almost have another season within a season. Who’s to say that as a group of players they can’t go on a run again,’

If Rangnick is confirmed as interim with Mauricio Pochettino a contender to take over on a permanent basis next summer, Carrick says they are walking into “the biggest job in football”.

His biggest decision last week was dropping Bruno Fernandes to the bench in Spain and it paid dividends as the midfielder changed the game late on when he replaced Donny van de Beek.

It’ll be interesting to see if Carrick starts with the Portuguese playmaker at Stamford Bridge or sticks to the same plan, keeping it tight for an hour and then introducing him when there is more space on the pitch.

‘Every player wants to play in the big games but the only reaction that counts is what you saw Bruno do when he came on,’ said Carrick. ‘He had such an influence on the game. Marcus (Rashford) as well. They pair looked fantastic when they came on.

‘As a player there is nothing more frustrating than not being at your best. I understand how the boys were feeling and they want to be back. I think that was a massive start for them the other night.’