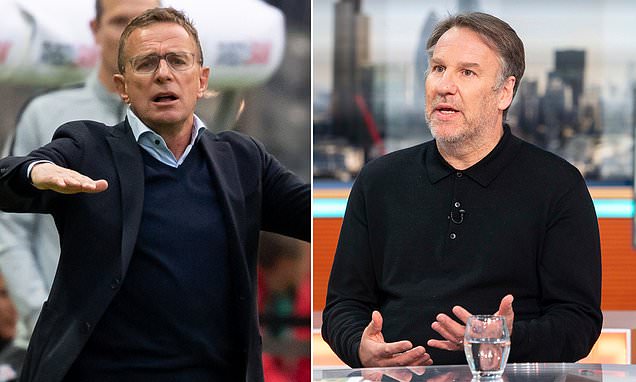 Paul Merson has questioned Manchester United's plan to appoint Ralf Rangnick as their interim manager until the end of the season.

The Red Devils moved for the highly-respected German coach, 63, following the sacking of Ole Gunnar Solskjaer.

Rangnick has been hailed as a 'football visionary for his 'Gegenpressing' style of football and has won seven trophies during his coaching career.


'Why do they need an interim manager? Because they don't know what they're doing at the moment, in my opinion,' Merson told Soccer Saturday.

'Ole would have been at the club still today if it wasn't for two goals in the last minute at Watford. I don't think there was any plan. They didn't think in their wildest dreams it was going to end up like that at Watford. At 2-1, I think he's still in charge come Sunday. I think they were going to keep it going as long as they could.

'Now, to bring in a manager… I'm hearing people going how great he is - but he's never managed in England, he's never managed one of the top teams in the world. Why is that? Why has no one else come in for him when managers have been up?

'I hear great things about him, people saying he's going to press and he's hard working and he's turned lesser teams into real contenders. But that's a lot different, getting a Schalke or a Hoffenheim to a certain stage.

'When you're asked to go to one of the biggest clubs in the world and they already have superstars and you've got to make them play… it's all right at Schalke and Hoffenheim because they're going to listen and they want to get there. These [United] players are there and you have got to get them to go again.

'What I'm hearing is it's like a gimme, he'll come in and that will be it. That Man Utd are lucky. I'm not sure about that.'