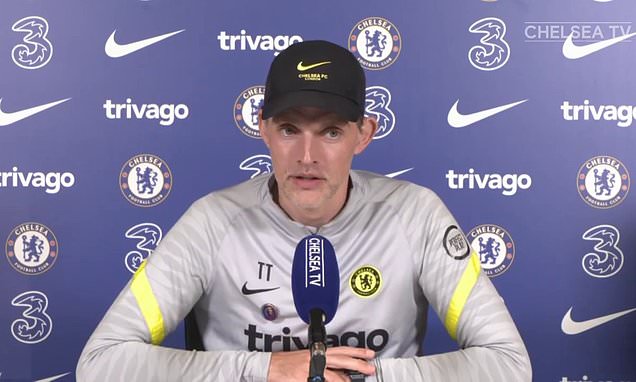 Thomas Tuchel was working as a waiter in a cocktail bar when Ralf Rangnick picked him up, shook him up and turned him around and turned him into someone new.

And, with apologies to The Human League, if that all sounds far too sentimental to be true, too much of a neat coincidence to build up to Sunday's clash of Chelsea manager against new interim Manchester United manager, it is pretty much what happened, according to Tuchel.

He was an angry young man who felt betrayed by football as he waited tables at the Radio Bar in Stuttgart, a washed-up pro at 24 with a dodgy knee cartilage when Rangnick called him back into football as an apprentice youth coach.

Ralf Rangnick, Manchester United's new prospective interim manager, sees United face Chelsea on Sunday, a side managed by Thomas Tuchel, whom he helped get into management

All his life he had wanted to be a Bundesliga player, only to have the dream snatched away from him.


He had been playing for Rangnick at SSV Ulm in the German regional leagues when the knee injury ended his career.

Just as he left, Ulm, led by Rangnick, became the fairy-tale of German football, rising through the leagues to reach the Bundesliga to play the likes of Bayern Munich.

Rangnick, then 40, was becoming a star but Tuchel could only reflect on what might have been as he studied for an economics degree at Stuttgart Business School and waited tables at Radio Bar.

'I saw my team-mates getting better and better under Ralf and making it to the first league (Bundesliga), which was always my dream,' said Tuchel last week, reflecting on the key role Rangnick played in his life.

'And this was my team and these were my team-mates. It was so close. It was the first time that I came so close to being maybe a first division player in the Bundesliga.

'When that happened, I was angry, actually. I was not depressed. I felt betrayed and was angry with the situation. I did not know what to do. All my life I dreamed to be a football player.

'Until that point, I had put all my energy and effort into this goal. I finished my school but this was my main target. When this was not a possibility any more, I needed to re-focus, which is not always easy.

'Telling the story now, it's easy to tell. But in these moments, to overcome your pride and to go to a bar and work for money and go to university, to meet people who know you and say: 'Hey, what's up with you? Don't you play any more?'

'You have to swallow your pride and overcome some difficult moments and days of looking into the mirror. But it sharpened my character. It was very healthy for me in the end.

Tuchel, now leading Chelsea, feels his old friend Rangnick will turn United back into a force

'I felt all over in football when I got the diagnosis and I felt in the rehabilitation process that I would not make it back to my level, which was at that time second, third division level.

It was precisely that moment that Rangnick, by now a Bundesliga coach at VfB Stuttgart, called his former player and offered him an internship as a youth team coach. Where might Tuchel, UEFA's coach of the year, be now had it not been for that intervention?

'I have no idea,' he says. 'You never know. Nobody can know. Ralf called me because he was my former coach. He knew I was in Stuttgart studying. He asked me if I could imagine to try in the academy.

'I did four months just being a second assistant in the youth academy. From there I did my licences and I started being a coach with the Under-14s.

'I still worked in the bar while I was a coach and I still finished my economics studies. He (Rangnick) opened the door. At some point, you have to go through the door and you are responsible to make the very best of opportunities for yourself.

'This is what I did, because I had people like Ralf who supported me, and so many more, starting with my father and everybody on the way from there in my life, which was then closely connected all the time to football. That's why I'm a lucky and a blessed person and happy and grateful for where I am.'

He is top of the Premier League 12 points clear of United, a Champions League winner and winner of two Ligue 1 titles, the French Cup and the German Cup. Rangnick by contrast has won the InterToto Cup and a German Cup, so in many ways the apprentice has surpassed the master.

Watching the pair now do battle in the Premier League should be a fascinating sequel to an already fantastical story.