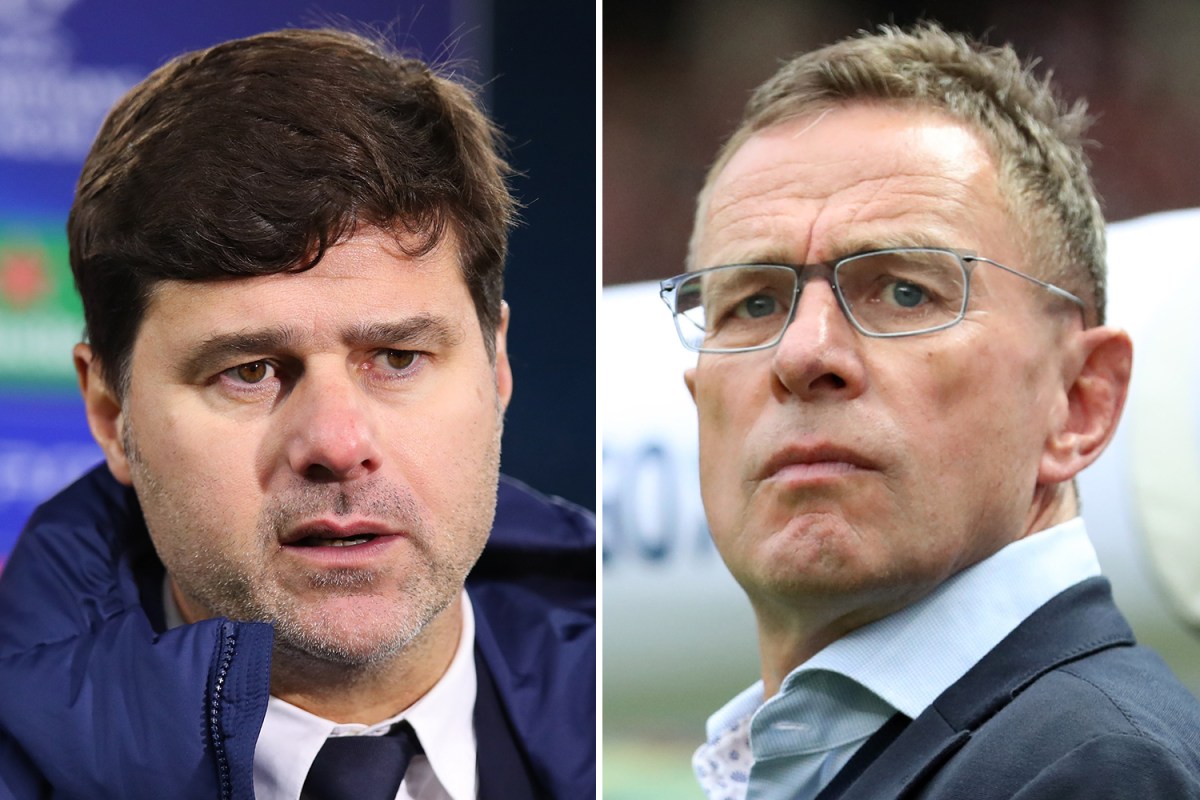 MANCHESTER UNITED are close to appointing Ralph Rangnick as interim coach, just under a week after the inevitable sacking of Ole Gunnar Solskjaer.

The former RB Leipzig and Schalke 04 manager will be signing on a six-month deal before taking on a role as a consultant within the hierarchy board, where he will help the club try to head in the right direction.

Mauricio Pochettino is the heavy favourite to take over in the summerCredit: Getty

Rangnick is also expected to have a say in who should be the next long-term manager at the club, which simply makes sense for it to be none other than Mauricio Pochettino, someone who has experience in coaching big-name players as well as possessing solid foundations as a manager.

Both individuals happen to be similar types of people, from their vocal character as a coach to their style of play as managers, allowing the Red Devils to have a clear identity on and off the pitch.

Currently at Paris Saint-Germain, Poch has found it incredibly difficult to implement his advanced footballing principles into the squad, as it is realistically not possible to have players such as Lionel Messi and Neymar be part of a side that play within an aggressive and high pressing system.

With reports he's not fully happy in France due the number of egos in the dressing room and having to deal with a political board that want to buy their way to success, it is not a surprise to see him wanting an instant return to the Premier League.

Especially at a football club that has wanted him since 2016.

Ed Woodward and the Glazers will be looking for an individual who can make an immediate impact and help to improve the side’s performances and results.

This would be seen as a huge step towards Pochettino instead of Ten Hag or Zidane, with the latter two having zero experience managing inside the Premier League and have not effectively proven themselves outside of Ajax and Real Madrid.

The 49-year-old Argentine has managed Southampton and Tottenham Hotspur, where he helped both clubs to play with a proactive approach based around a high pressing system.

At the Saints, he assisted the team in achieving their highest top-flight finish in 14 years, which is quite impressive when noting the 2013/14 season was his first full season at the club, winning 15 out of 38 matches.

During his five-and-a-half seasons at Spurs from 2014 to 2019, he led the side to Champions League football in four consecutive campaigns, where the team finished third (70 points), second (86 points), third (77 points) and fourth (71 points).

On top of that, he took a young Tottenham squad to the Champions League final in 2019, despite the limited funds provided by chairman Daniel Levy.

United’s managerial issues have been ongoing since the retirement of Sir Alex Ferguson, as the coaches that have come through after him have failed to adapt to the modern era of English football.

David Moyes and Ole Gunnar Solskjaer came into the job with non-existent knowledge of how to manage a big football club, whilst Jose Mourinho and Louis van Gaal had brought in ideas and methods which were simply outdated, making them successful in the late 1990s/early 2000s.

Meanwhile, Pochettino has made a name for himself with his intense and aggressive style of play, where his side press the opposition high up the pitch and force them to make mistakes in their own half.

Having learnt the basics of management and how to coach as a disciple of Marcelo Bielsa, the Paris Saint-Germain manager is the type of individual who is attentive to each detail, wanting to always improve his ways as a coach and ensure there are no weaknesses within his system.

The Old Trafford faithful in recent years have been witnessing a side without a consistent and effective style of play, where the team have not performed dominantly as a collective and have been relying on individual brilliance week in week out.

With the potential arrival of Pochettino, United would be playing on a regular basis with a clear shape and a strong showing of attacking patterns and passing combinations, something that has been missing during the Solskjaer and Mourinho era.

Over the last five years, not many youngsters within the Manchester United squad have improved and taken their game to the next level.

Some players have been unable to overcome the high expectations set by the coach, and others have been sent out on loan season after season, preventing them from having the much-needed opportunity to prove themselves at Old Trafford.

Pochettino has played a crucial role in helping to develop and grow young players during his time at both Southampton and Tottenham Hotspur, particularly with the English players in Adam Lallana, Luke Shaw and Kyle Walker, who have gone on to moving to the best teams within the Premier League.

Along with these individuals he has done an amazing job in assisting Harry Kane to become the player he is today, as he is clearly recognised as one of the best strikers in England and Europe.

With the likes of Jadon Sancho, Marcus Rashford and Mason Greenwood being a few levels below the world class bracket, the arrival of Pochettino would instantly help these attackers to become ruthlessly clinical going forward and pressing machines off the ball.

The Red Devils have one of the best academies in England, however, the players who have graduated into the first-team squad have not developed under previous managers, which would change through the presence of Pochettino.