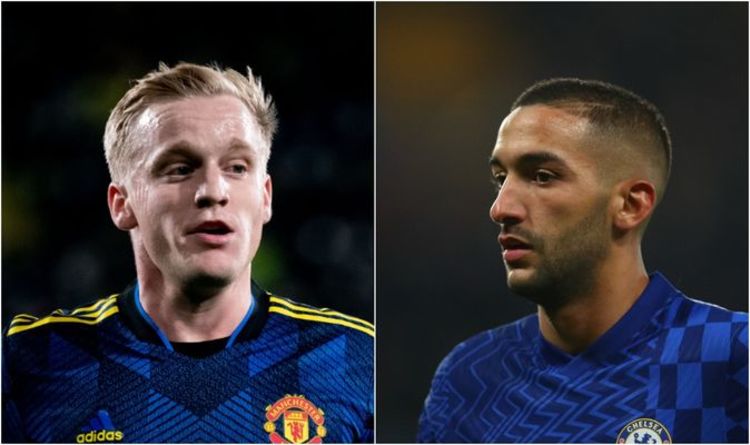 Chelsea star Hakim Ziyech has already made his feelings clear on the struggles of Manchester United star Donny van de Beek, with a suggestion that he could be a danger when the sides face off on Sunday. The Dutchman may be given a new lease of life under caretaker boss Michael Carrick, and potentially Ralf Rangnick thereafter, having struggling under Ole Gunnar Solskjaer.

Chelsea are likely to approach their tie with United full of confidence, given they top the Premier League after 12 matches.

The Red Devils, meanwhile, have slid down to ninth place thanks to the disastrous form during Solskjaer's final weeks in the job.

In his one match so far, Michael Carrick has shown a marked improvement during a 2-0 victory over Villarreal in midweek, but that is not the only reason for the Blues to add caution to their confident approach.

The renaissance of Van de Beek, which may or may not be on the horizon, is something which Ziyech is fully aware of as a former Ajax team-mate.

Speaking last year, the Chelsea winger discussed Van de Beek's United struggles as well as his capacity to add quality to the squad once he finds a rhythm.

"We spoke in the beginning when he moved to Manchester," Ziyech said via the Metro.

Having said that, the German is likely to be confident regardless given the Blues' imperious form.

A Premier League hiccup against Burnley now seems a distant memory since the international break, and the midweek thrashing of Juventus comes as a warning to United.

At present, a trip to Stamford Bridge may be the toughest assignment English football has to offer.

A wildcard performance from Van de Beek, which Ziyech knows the midfielder has in the tank, may subsequently be what it takes to earn a surprise result.