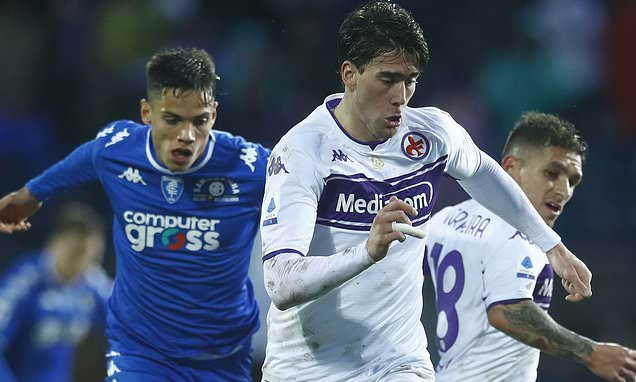 The Serbian striker scored again on Saturday in his club's 2-1 defeat at Empoli to make it 28 goals in 38 games this calendar year and Fiorentina are willing to sell in January as he is refusing to sign a new contract.

The Italians have tried to convince Vlahovic to extend his deal which runs until 2023 but he is looking to capitalise on his form and take on a new challenge.

Fiorentina sense the time is right to cash in but their pricetag is making clubs think twice over a January bid with many hoping to wait until June.


Juventus have maintained a regular watching brief on the powerful 6ft 3ins forward as have Tottenham, Arsenal and Newcastle United.

However, Europe's other elite clubs are taking a closer look, alerted by his goalscoring statistics. Bayern Munich checked on him last week and Manchester United have also been to watch him.

United want a centre forward for the long-term and remain interested in Borussia Dortmund's Erling Haaland, who scored on his return after injury on Saturday, but know they face fierce competition.

Their priority is considered to be a defensive midfielder and cover at right-back but they have to be mindful of movement in the market and potentially missing out on talent such as Vlahovic.

Much will depend on Ralf Rangnick's assessment of the current squad but United are likely to do limited business in January.

The 63-year-old Rangnick loves to work with quick young forwards so is understood to be excited at the prospect of improving Jadon Sancho, Marcus Rashford and Mason Greenwood in particular but his role will include planning for the future and with Cristiano Ronaldo and Edinson Cavani 36 and 34 respectively, United are open to recruiting a young goalscorer.

United have a number of players who are considering their options in January. Dean Henderson, Donny van de Beek, Diogo Dalot, Phil Jones, Eric Bailly and Jesse Lingard are among the names who will want to discuss their future and what opportunities lay ahead with Rangnick. Indeed, Lingard had made up his mind to leave earlier this month prior to Solskjaer's departure.