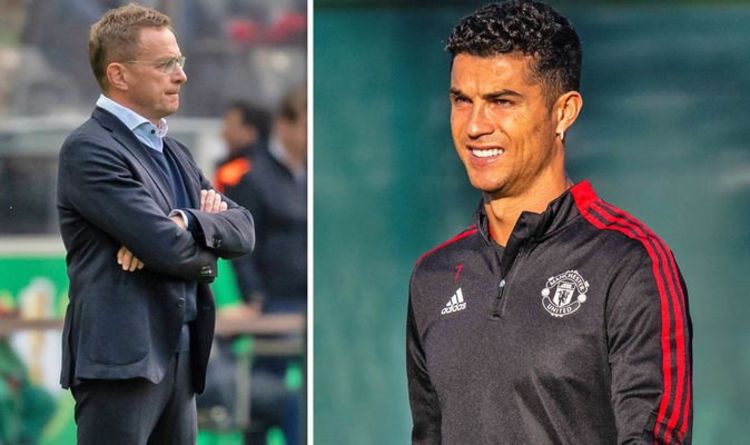 Cristiano Ronaldo could be moved into midfield when Manchester United are out of possession once Ralf Rangnick moves to Old Trafford, it has been suggested. The 63-year-old is poised to replace Ole Gunnar Solskjaer on an interim basis. And that means big chances are primed to take place.

Ronaldo has scored 10 goals for United across all competitions, with his latest coming against Villarreal in midweek.

But with Rangnick poised to take over, that’s led to some suggestions he may struggle for regular action.

The German likes his forwards to press from the front and Ronaldo’s stats, when it comes to that area of his game, are lacking.

And Bundesliga football expert Raphael Honigstein, writing for The Athletic, has suggested Ronaldo may have to drop into midfield when United are out of possession once Rangnick’s appointment is confirmed.

“Dropping the ultimate ego-shooter would create an instant battle that Rangnick can surely do without in his first few weeks in town.

“But that’s different from saying Rangnick’s past it. Tactically, his ideas are still at the forefront of modern coaching and it’ll be hugely exciting to see him add layers of football onto the pressing blueprint.

“His frequent changing of backroom staff speaks to a willingness from Rangnick to develop and adjust. He will do just that, I’m pretty sure.

“He’s not the one-dimensional pressing dictator that some people have described him as, and his coaching style in 2021  should also be far more relaxed than a few reports have made out.

“He’s no Mourinho, constantly playing games with peoples’ psyche to get a reaction. Nor is he humourless like Van Gaal.

“In summary, there should be enough structure and discipline but none of the recriminations and toxicity of so much of the post-Ferguson years.”

Rangnick wants a consultancy role at United when his time as manager comes to an end.

But Honigstein doubts the club would give him a ‘position of real power’.

“As far as I can tell the role awaits more clarification after the season is over,” he said.

“But it’s unlikely that United will put him in a position of real power.

“They will probably use him as a consultant, as the agreement itself specifies, and have him focus on process, structure and general building work behind the scenes rather than front of house.”