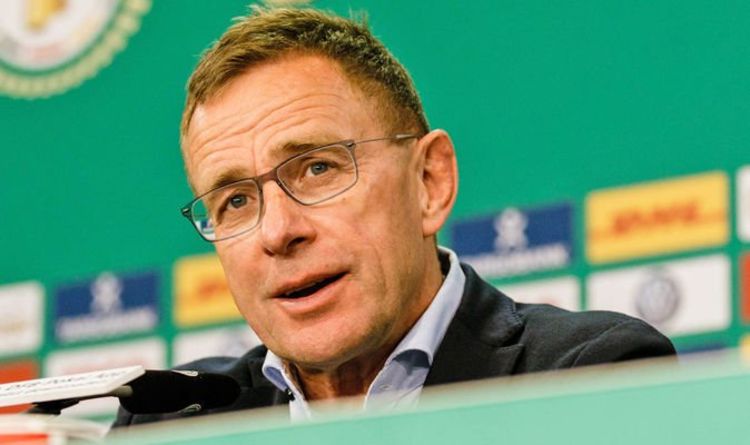 Ralf Rangnick is open to becoming the permanent manager of Manchester United, according to reports. The German is set to be given the reins at Old Trafford until the end of the season following the sacking of Ole Gunnar Solskjaer. But negotiations with the Red Devils remain ongoing.

United axed Solskjaer last weekend, relieving the 48-year-old of his duties following a dire 4-1 defeat away at Watford.

And, on Thursday, it emerged the Red Devils were primed to bring in Rangnick as his temporary replacement.

United want the German to steady the ship until the end of the campaign, where they’re expected to pursue Erik ten Hag or Mauricio Pochettino.

But The Sun say there’s a chance Rangnick could become the permanent manager of the Red Devils, with the 63-year-old hoping for a possible clause that would allow him to continue in the role if he wants to.

Furthermore, the Glazers have been given another ultimatum.

Rangnick is keen to move upstairs as a consultant when his time as United manager ends in the summer.

"Whoever comes in and whatever is implemented I’m sure they can adapt, there’s some really good talent within the squad, sure they'll look forward to what's ahead."

Meanwhile, Darren Bent has had his say on Rangnick’s imminent move to the Premier League.

And he’s called on United to be ‘brave’ and not give him the job for the long term.

Bent said on talkSPORT: "[Rangnick]'s certainly got the pedigree in terms of, say he was to end the season from now really, really well, you finish comfortably in the top four, you somehow pick up a trophy somewhere.

"He's obviously got the credentials to maybe go on and potentially become their permanent manager.

"If he doesn't and he goes onto the board, then fair enough, but it's one of them where it's completely taken me by surprise.

"They spoke about Pochettino all week. Obviously it's evident that that wasn't going to happen. Michael Carrick, he probably wasn't ever going to get the job.

"I thought it would be a lot easier than it has been in terms of Manchester United Football Club.

"They're one of the biggest clubs in the world, they can attract pretty much who they want.

"But at least they've got someone who knows what they're doing."