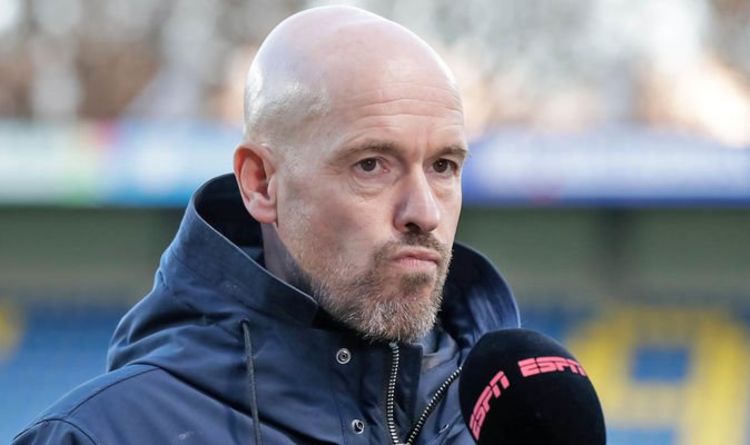 Ajax fear Manchester United swooping for Erik ten Hag in the summer, reports say. The Red Devils are set to give Ralf Rangnick their position as manager until the end of the campaign following the departure of Ole Gunnar Solskjaer. But the club are still eyeing a different boss to take charge at the end of the campaign.

Manchester United sacked Solskjaer last weekend, opting to relieve the Norwegian of his duties following a 4-1 defeat away at Watford.

Rangnick will now take charge on an interim basis, with the 63-year-old poised to leave Lokomotiv Moscow for Old Trafford.

Yet while United are eyeing Mauricio Pochettino, the Daily Mail state the Red Devils have ‘registered an interest’ in Ten Hag, too.

The 51-year-old has done well at Ajax over the past four years, helping to rebuild the Amsterdam outfit after a host of big-name departures.

United are admirers and, should they miss out on Pochettino, are eyeing a move for Ten Hag instead.

And, with Rangnick set to take charge for the foreseeable future, it’ll be interesting to see how things play out.

Rio Ferdinand, meanwhile, recently opened up on both Pochettino and Ten Hag.

"I've heard people say if Pochettino struggles with this team - with, on paper, better players - how will he do it at Man United?” he said on BT Sport.

"To counter that you look at Thomas Tuchel - he couldn't do it with this PSG team, so it's unfair to judge Pochettino on his time at PSG.

"Out of all them, I think Pochettino is the most likely [to be appointed]."

Man Utd news: Ralf Rangnick is poised to take charge until the end of the season (Image: GETTY)

Ferdinand added: "What you've been crying out for United is DNA and that's no question with his [Ten Hag’s] team in Ajax.

"Yes everyone expects him to win the league, but you still have to do and create a way of playing that suits your players.

“He went through a phase of rebuilding, because they got rid of their three best players.

"He's managed to gel it all together. He knows how to put teams together - and that's definitely an ask for United."

United have appointed four managers since Sir Alex Ferguson's retirement in 2013, with the quartet all failing to win the Premier League title.