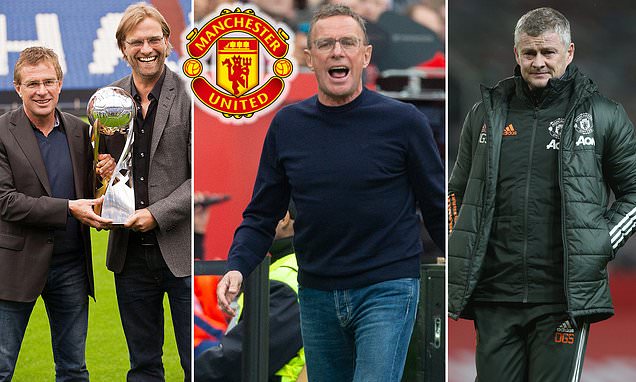 There is an episode of Seinfeld in which George decides all the decisions made throughout his life have been mistakes.

‘Every instinct I have in every aspect, be it something to wear, something to eat, it’s all been wrong,’ he says. He vows to do the opposite from that moment.

It would appear the same logic has taken hold at Manchester United. The dark mind of Jose Mourinho was replaced by little ray of sunshine Ole Gunnar Solskjaer. That didn’t work, so now Solskjaer gives way to Ralf Rangnick.

Manchester United are going from being the least coached elite side in the world, to the most. If Ole’s at the wheel, Rangnick’s style is to be at the wheel, in the passenger seat and shouting instructions from the back, too.


The money must be good because, asked to perform a similar role at Chelsea after Frank Lampard’s dismissal, Rangnick said roughly four months was not enough time to have an influence. Maybe he was surprised at what Thomas Tuchel contrived to do in a similar period — or maybe six months makes him think he can bend United into a recognisable shape.

If order and structure are what have been missing this season they are arriving with bells on now. Rangnick is a famously influential leader, credited with inspiring the current generation of German coaches without ever getting an opportunity at a truly big club. Reputationally, he’s Marcelo Bielsa with an umlaut.

It seems strange, then, that Manchester United only see him as a manager for six months and then a consultant for two years after. If he succeeds, why would he want to shrink into the shadows? If he fails, why would anyone take his advice?

Rangnick is a famously influential leader -  reputationally, he’s Marcelo Bielsa with an umlaut

Rangnick seems exactly the sort of figure United need right now, were they not obsessed with the optics of the big name.

He has one domestic cup on his honours board which puts him on a par with Mauricio Pochettino. The German, however, has never been blessed with the stars that orbit Paris Saint-Germain, or even Spurs.

Rangnick’s talent has always been for creating great players, rather than recruiting them.

Given this, it will be interesting to see how he goes about fitting Cristiano Ronaldo into what is a pretty clearly defined method of play: high energy and high pressing.

Rangnick’s talent has always been for creating great players, rather than recruiting them

How will Cristiano Ronaldo fit into what is a clearly defined method of high energy and press?

At a recent coaches’ conference in London, Rangnick spoke of the best managers knowing precisely what football they want to play. He was insistent that all have a distinct vision of what their team looks like.

‘They have a video of the perfect game in their heads,’ he said. And if we think about Jurgen Klopp, Pep Guardiola or Tuchel, he’s right. Their teams would be recognisable even without colours. So would Rangnick’s.

Few had a clue what United were trying to achieve under Solskjaer, sadly. They were a halfway house. Pressing one minute, dropping the next. Rangnick will afford clarity — and if he’s as smart as he sounds, he should be able to adapt his strategies to the presence of Ronaldo, too.

We’ll know more next week. Rangnick cannot get a work permit for United’s match at Chelsea, so the interim is denied a debut against disciple Tuchel. It remains to be seen whether United’s latest 180 degree turn will work as swiftly as the last.

In the episode The Opposite, George determines to approach a very pretty girl in the diner.

‘My name is George,’ he says. ‘I’m unemployed and I live with my parents.’