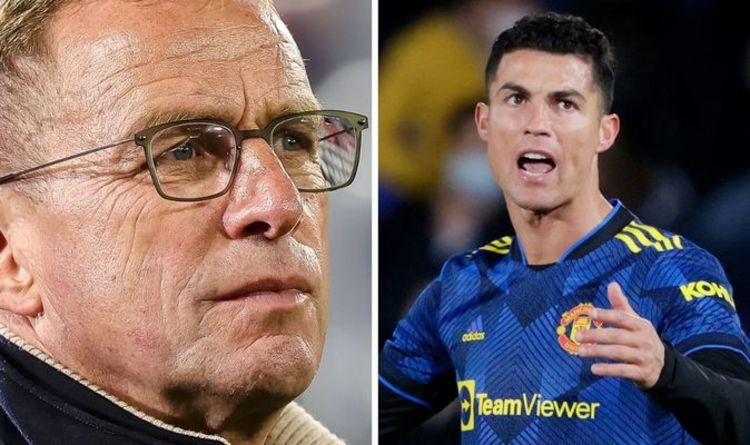 Rangnick has reportedly reached an agreement with United to become the club’s interim manager, after last Sunday’s sacking of Ole Gunnar Solskjaer. The agreement is allegedly subject to the 63-year-old being released from his current role at Lokomotiv Moscow, where he is head of sports and development. According to reports Rangnick has agreed a six-month contract that will see him take charge of the Manchester club until May.

He will then take on a consultancy role at the club for a further two years.

However, according to the Athletic’s report, work permit reasons mean he will not be in charge for the weekend’s game against Chelsea.

Instead, Michael Carrick will pit his wits against Blues boss Thomas Tuchel in just his second game as manager.

Rangnick has previously managed Hannover, Schalke, Hoffenheim and RB Leipzig while he also took German minnows Ulm to the Bundesliga for the first time in 2000.

Yet he will be inheriting a dysfunctional United side, who sit in eighth place in the Premier League after a shambolic 4-1 defeat to Watford last weekend.

If the German is to turn the Manchester side’s form around he will need to keep Ronaldo happy and firing on all cylinders.

Under Solskjaer there had been reports Ronaldo was concerned about the club’s direction while his agent Jorge Mendes had allegedly made calls seeking clarity about the situation in the dugout.

However Rangnick’s past comments on the Portuguese star are unlikely to have warmed United’s talisman to the club’s likely new boss.

When asked in a throwback press conference if he would sign either Ronaldo or Lionel Messi, Rangnick labeled both players as “too old”.

He said during one of his stints at Leipzig: “It would be absurd to think that it could work with them here.

“They are both too old and too expensive.”

Rangnick is notorious for spotting emerging talent and developing young players, having been responsible for RB Salzburg signing Sadio Mane.

Rangnick is affectionately branded as the ‘godfather’ of German football with his pressing style having inspired Liverpool boss Jurgen Klopp.

He is also regarded as a mentor to Tuchel, Bayern Munich manager Julian Nagelsmann and Ralph Hasenhuttl, having worked with all three in the past.

However, half a decade since his comments, Ronaldo, who is now 36, has shown few signs of slowing down.

He scored his 10th goal of the season in United’s crucial Champions League win against Villarreal on Tuesday.

Of course, Rangnick is not the only person to have questioned Ronaldo’s age, with former United midfielder Paul Scholes this week referring to the Portuguese attacker when criticising the club’s recruitment.

Scholes said on BT Sport: “You talk about recruitment, this is Manchester United.

“Our two best strikers are 36 and 34 (Edinson Cavani). That’s embarrassing.

“How that has happened I'll never know.

“The strikers we have, you get to 30, you probably have to go.