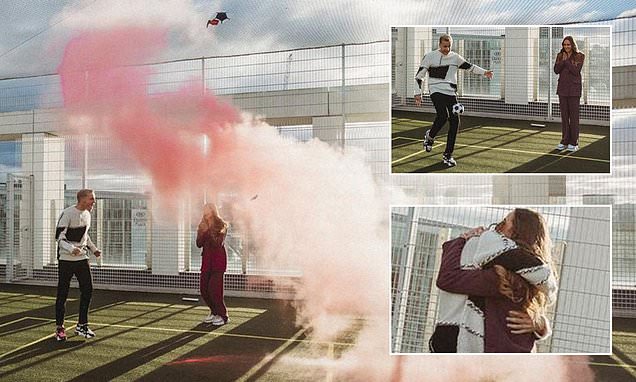 Manchester United midfielder Donny van de Beek and Estelle Bergkamp have revealed on Instagram that they are expecting baby girl.

The Dutch couple put together a touching set of photos on Instagram showing Van de Beek, 24, volleying a ball which bursts to reveal pink dust instead of blue, before they embrace afterwards. Bergkamp, 25, is the daughter of Arsenal legend Dennis.

The gender reveal was not the only good news for Van de Beek this week as he was handed a rare start by caretaker manager Michael Carrick in United's 2-0 win at Villarreal in the Champions League on Tuesday night.

The young Dutch couple embraced afterwards, with their first child due in the new year

Having been on the fringes of Ole Gunnar Solskjaer's side since his arrival at Old Trafford in the summer on 2020, Van de Beek will hope that bodes well for his future now that Solskjaer has been sacked.


Van de Beek and Bergkamp revealed that they were expecting their first child earlier this month. Alongside a picture of the couple together holding an ultrasound scan picture, Van de Beek wrote: 'Happy to announce that we’re expecting a little one.'

Former Arsenal forward Dennis, who scored 87 league goals in 315 Gunners matches, will become a grandad in the new year.

United team-mates Jesse Lingard, Alex Telles and Diogo Dalot were among those to congratulate the couple on their big news.

However, compatriot and former Holland and Everton winger Andy van der Meyde commented on the social media post, joking: 'Congratulations, will the name be Ole Gunnar?' followed by a laughing crying face emoji and love heart.

Van de Beek joined United from Ajax for £40million and has 19 Holland caps.