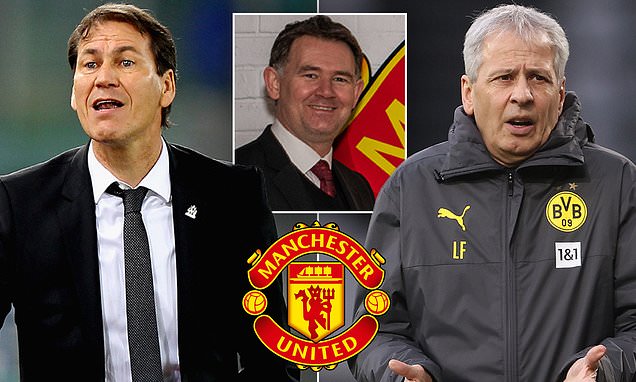 Lucien Favre and Rudi Garcia have both impressed the Manchester United hierarchy in their respective talks over the vacant interim manager position, according to reports.

Sportsmail revealed on Tuesday that the managerial pair were part of a five-man shortlist for the temporary role at Old Trafford following Ole Gunnar Solskjaer's sacking last week.

Michael Carrick is currently acting as caretaker boss of the Red Devils and won his first match in charge - a 2-0 Champions League victory over Villarreal - but United are still on the lookout for a temporary boss until the summer.

Lucien Favre (left) and Rudi Garcia (right) have impressed Manchester United in talks for their interim manager role, according to reports

And according to The Independent, Favre outlined a vision for the United team that impressed club bosses in talks this week, while Garcia also impressed in his discussions with the Premier League side.


Sportsmail understands United are looking for only an interim manager to bring stability to the club in a hectic season before making a long-term approach over the summer.

Former Barcelona boss Ernesto Valverde has already held talks with United’s director of football John Murtough along with former Lyon boss Garcia, who took the French club to the Champions League semi-finals in 2020.

Lokomotiv Moscow’s head of sports and development, Ralf Rangnick, former Borussia Dortmund boss Lucien Favre and ex-Roma boss Paulo Fonseca are among the other names being linked with the temporary role. But sources in Germany said on Tuesday night that Rangnick is cool on the idea of a short-term stint.

United have also accepted that it will be too difficult to take long-term target Mauricio Pochettino from Paris Saint-Germain now.

Although PSG on Wednesday denied that an official approach for Pochettino has been rejected, Sportsmail understands United have tried to discreetly ascertain through a third party whether a move to install the former Tottenham boss as permanent manager as soon as possible would be a realistic option.

The indications are that PSG would be reluctant to let the Argentine depart mid-season and disrupt their campaign, although he is expected to re-emerge as a leading candidate for the United job in the summer.

While the search for an interim continues, Carrick is set to stay in charge for Sunday’s trip to Chelsea after winning against Villarreal with goals by Cristiano Ronaldo and Jadon Sancho.

Meanwhile, Brendan Rodgers sought to put an end to speculation linking him with a switch to United, saying on Wednesday that he was committed to developing his Leicester team.

Rodgers, who has been touted as a potential replacement for Solskjaer, said: ‘It’s not real. There’s always gossip and that will be there until they appoint a full-time manager. My commitment is to here (Leicester). The culture here is about the development of the players and that’s where I see it — even more so in this period.’