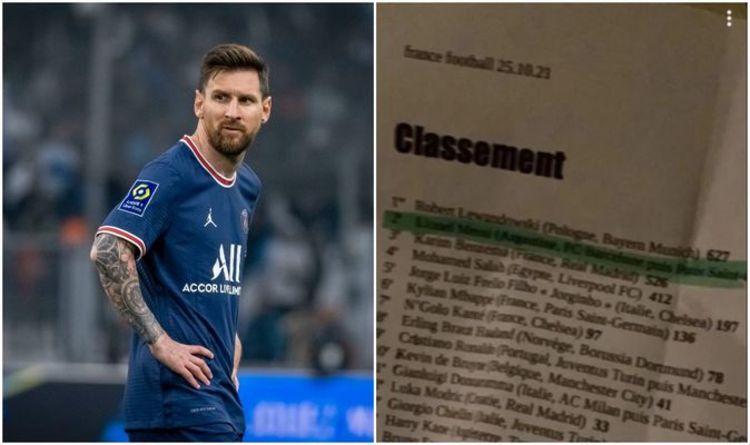 Lionel Messi could sensationally be pipped to the Ballon d’Or by Bayern Munich striker Robert Lewandowski, according to a leaked photo which appears to reveal the winner of this year's award.

Paris Saint-Germain star Messi has won a record six Ballons d’Or but it now seems likely that he will not be presented with a seventh.

A picture of a document dated October 25 allegedly from France Football shows the ranking of the nominees, which were announced last month.

If the leaked document is legitimate, the 33-year-old Lewandowski would be rewarded for a fine 12 months with his first Ballon d’Or.

The Poland striker broke a record previously held by Gerd Muller when he bagged his 41st and final goal of the season last term. It was the most goals ever scored in a Bundesliga campaign by a single player.

Lionel Messi will apparently miss out on a seventh Ballon d'Or (Image: GETTY)

Lewandowski has scored a staggering 10 goals in nine appearances this season, making him a contender for next year’s Golden Shoe.

His excellent form appears to have won him the Ballon d’Or, while Messi, whose form since his move from Barcelona to PSG has been inconsistent, is in second place. Real Madrid’s Karim Benzema is third.

Liverpool’s Mohamed Salah, who is a strong contender to win, is shown in fourth. The Premier League continues to be well represented.

“I don't have to prove myself in another league,” he said after collecting the European Golden Shoe, awarded to the top scorer among the European leagues every season, in September.

“I can compete with the best from other leagues in the Champions League.

"I am 100 per cent focused on Bayern Munich, I don't think about anything else but my team."

Asked if Bayern could sign Erling Haaland has his replacement, Lewandowski shot back: "I am still here - and I will be here for a long time.

"Age, these are just numbers. I feel very good, I have the best stats I've ever had. I know that with my body I can play at the top level for years to come.

"I'm like a good wine and I hope to get even better."