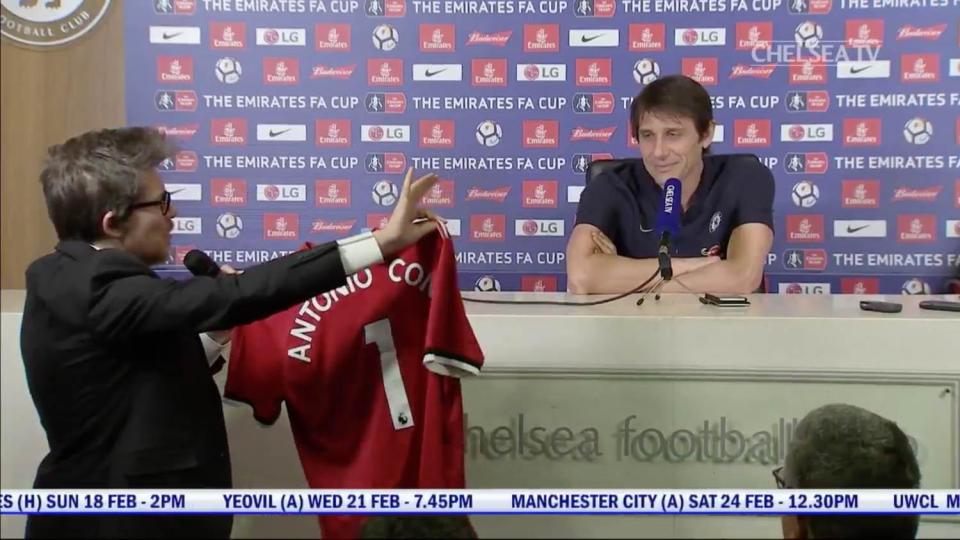 ANTONIO CONTE once turned his nose up at a Manchester United shirt when he was Chelsea boss.

But the Italian is now said to be open to taking over at Old Trafford should under-fire Ole Gunnar Solskjaer get the boot.

Antonio Conte was pranked by an Italian comedy show

The same jokers handed Jose Mourinho the shirt when he was Man Utd bossCredit: Eamonn and James Clarke

Conte was handed a United shirt with his name on the back when he was in charge of the Blues back in 2018.

The 52-year-old was pranked by Italian comedy show Le Lene ahead of an FA Cup clash with Hull.

The ex-Juventus and Italy boss looked perplexed as he was presented with the shirt at a pre-match press conference.

At the time he was under pressure despite the Premier League title heroics of the previous season.

The joke fell a little flat as Conte produced a puzzled expression before asking his club press officer to calm things down and move on.

The stuntmen had earlier presented the same shirt to then-United boss Jose Mourinho, whose job situation at the time was similarly perilous.

Conte is the bookies’ favourite to replace Solskjaer in the Red Devils hot seat if the Norwegian fails to save his job.

Ole is desperately trying to halt a dressing room meltdown following the humiliating 5-0 defeat by arch rivals Liverpool on Sunday.

Club officials are said to be torn over whether Conte is the right man for the job amid fears he won’t play the ‘United way’.

And his fiery character could prove explosive in the club hierarchy - he is already reported to be demanding full control over transfers if he were to take the job.