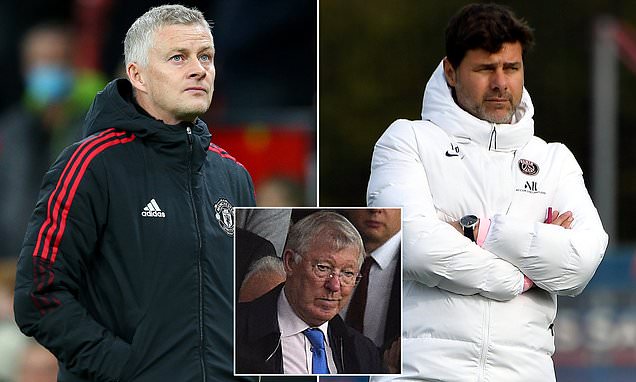 The United manager has never been under more pressure following their humiliating 5-0 defeat to Liverpool on Sunday.

Pochettino has been linked with the job in the past but has been managing Paris Saint-Germain since January.

The Daily Star have reported that United still consider Pochettino to be their top choice despite the fact he already has a top job.


It's said that United originally wanted Solskjaer to 'bridge to the gap' between Jose Mourinho and Pochettino at Old Trafford.

That was until United's memorable win over PSG in the Champions League in 2019 helped earn the interim boss the job permanently.

The United boss will be given more time despite Sunday's embarrassing defeat, with the Daily Star stating that this will give them more chance to gauge the availability of Pochettino - someone who is highly rated by Sir Alex Ferguson.

Sportsmail previously reported that United — who gave Solskjaer a new three-year contract over the summer — were planning to review the 48-year-old’s position in December.

United had not been prepared for such a dire run of results, with Solskjaer’s side losing five of their last nine games.

The club’s board has so far resisted the calls for change, with the Norwegian expected to remain in charge at Spurs. Ferguson and former chairman Martin Edwards visited Carrington on Tuesday afternoon, with United insisting the pair were attending a pre-planned commitment.

Former Liverpool and current Leicester boss Brendan Rodgers, along with Ajax's Erik ten Hag have also been linked to the role should it become available.