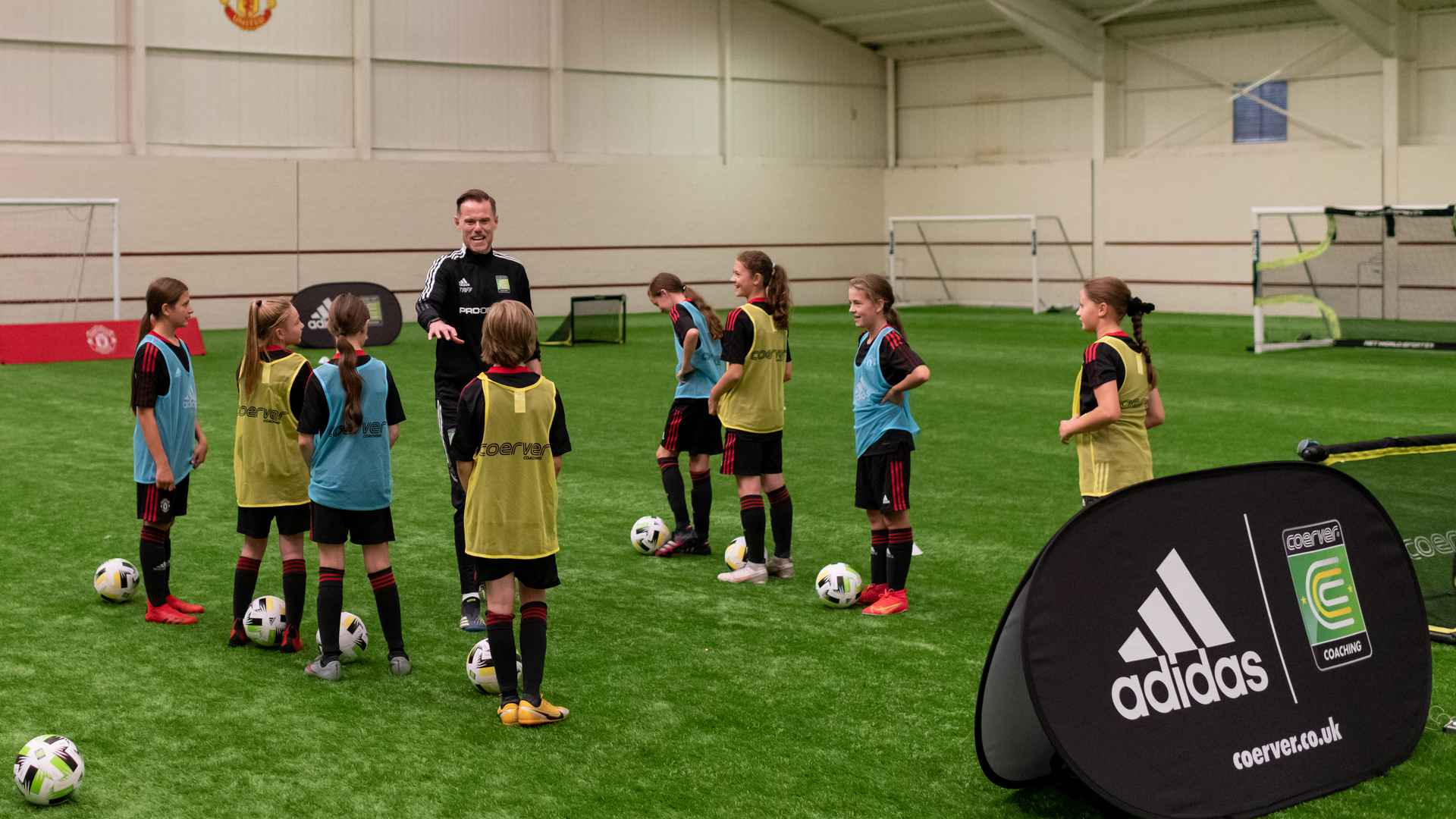 In late August, ahead of the start of WSL season, Coerver Coaching, Adidas and Manchester United launched a new partnership with a coaching clinic held at The Cliff.

The cold and dark days of the winter lockdowns in the United Kingdom allowed the coaching staff at Manchester United’s Regional Talent Clubs (RTCs) to work on what they call the ‘Redprint’.

The RTCs, where talented young female footballers from Greater Manchester play from U10 upwards, are the long-established foundation of United Women with a history of successful internationally-honoured graduates pre-dating the 2018 restart of the first team and Under-21s.

To improve on an already outstanding record – United Women have had an Academy graduate in every matchday squad since 2017/18 – focus has turned to building a long-term sustainable programme suitable for the Under-7s as much as the first team.

Key has been the involvement of all those at every level, from Casey Stoney and now Marc Skinner down to coaches of the U10s and U12s teams.

Matt Johnson, Performance Director of the RTCs, explains that it had long been in the plan to “curate a really fluid flow” from age group to age group. The anchor to that flow would be the ‘Redprint’.

“Lockdown gave us more focus, time and energy to concentrate on it because you’re not juggling fixtures,” Johnson says. “I think we’ve been able to do more with it in a shorter space of time.

“It’s alright having something on a glossy document,” he continues, “but if it doesn’t get executed by the coach, it falls down.

“That’s why it’s really important we invest time and energy into the staff because they’re the face of the programme. They’ve got to be on board, understand it, be skilled, knowledgeable, enthusiastic and able to implement it.”

Hence, the Coerver Intro coaching clinic, in partnership with adidas.

WHAT IS COERVER?
Coerver, in its simplest terms, is about technical excellence. In practice, this means the teaching of skills, with repetition and increasing difficulty and speed. Those skills can range from a simple stepover to something less flashy but perhaps more advanced, like body position when facing a defender.

Scott Wright, England & Wales Director of Coerver Coaching and leader of the session at The Cliff, explains further.

“The foundation of Coerver is skill at a young age,” he says. “Once you’ve got that as a base, the other parts come. The modern game is quicker; there’s less time, less space and defences are more organised. If you don’t have that element of skill, that mastery of first touch, passing, winning the 1v1s, then the game becomes a real challenge. It’s about giving the players those basics.

“Once you’ve got that as a base and you’ve progressed as a player, it’s about polishing and refining, it becomes more functional around the position they play in the team. So, if I’m a winger, how can I get more crosses into the box; if I’m a striker, can I create more chances with my back to goal; if I’m a midfielder, how can I switch the play more effectively?”

AN EXAMPLE OF COERVER COACHING

Wright held a couple of lectures with United’s RTC coaching staff. On the theme of 1v1s, which Coerver massively emphasises – Wright says football is a game with lots of much smaller games, 1v1s, within it – one coach asks how to train a fantastic 1v1 player who doesn’t pass enough. One solution offered is to overload the defenders, make it a 1v3 and make it harder for the player. Then give them a team-mate, make it 2v3 or 2v4, and force them into combination play. The key is to engineer a situation in which the players themselves work out that passing is essential to success, rather than simply telling them.

Later in the lecture, Wright explains a key part of the Coerver philosophy on 1v1s. We often think of a 1v1 scenario involving an attacker running at a defender, but one study has shown that 65% of 1v1s are in fact with the defender behind, chasing the attacker with the ball. In that case, that has to be trained as much, if not more, than facing a defender front-on-front. And so Coerver coaches skills for players to beat their defenders whether they are in front, behind or to the side of them.

COERVER’S HISTORY WITH MANCHESTER UNITED
Alex Ferguson, at Aberdeen, had Coerver video tapes in his office. At United, shortly after becoming Sir Alex, the Scot brought Rene Meulensteen in to help remodel the youth development programme. Meulensteen was a direct protege of founder Wiel Coerver, the Dutch coach guided Feyenoord to a 1974 Eredisivie-UEFA Cup double. After a short stint away as Brondby manager, Meulensteen returned to a senior role to work on individual player development, helping players like Cristiano Ronaldo to refine their games.

Meulensteen (right) had a big impact after being brought in by Sir Alex.

United Women manager Marc Skinner took time out of a rare day off to visit the U12s training session and coaching clinic at The Cliff.

“We want to see as many of you in the first team as possible,” he enthusiastically tells the U12s girls as they pause their session to listen to him speak. ‘Work hard, have no regrets, listen to your coaches’ is the general gist of the message he delivers, before answering questions.

United Women manager Marc Skinner spoke to the club's U12 side at The Cliff.

Once the players get back to training, he talks in more detail to the coaches, asking about their exact roles and their lives in general. It’s engaging. One Under-21s player is there, keeping herself busy while she’s injured. She’s been playing at the RTCs since she was six, Matt Johnson explains to Skinner. “You can teach me all about Manchester United,” Skinner says, asking to go for a coffee to do just that.

It sums up his attitude to the club and demonstrates the importance of the work the RTCs do.