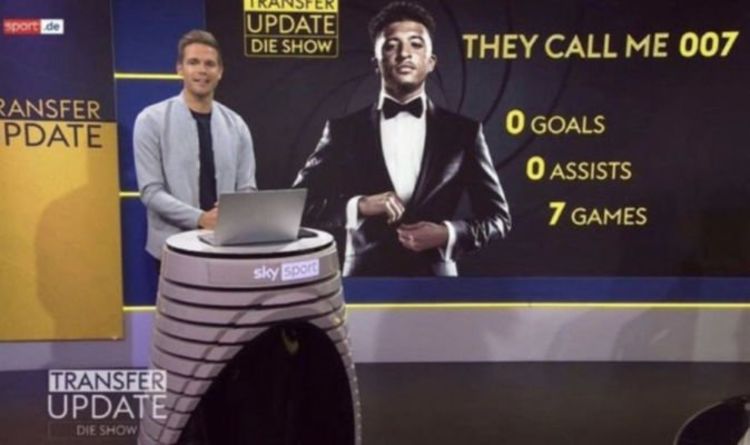 Manchester United winger Jadon Sancho was brutally mocked by Sky Germany after his poor start to life at Old Trafford. Sancho is yet to score or assist for the Red Devils following his £73million move from Borussia Dortmund in the summer.

Sancho has appeared in seven Premier League games since joining Man Utd but has failed to find his best form and remained on the bench as his side were thrashed by Liverpool on Sunday.

And now Sky Germany have used a James Bond theme to ridicule the 21-year-old.

On Tuesday, Sky Germany posted a graphic of Sancho dressed in tuxedo similar to the one Bond would wear.

“They call me 007,” reads the wording next to Sancho in reference to the code number Bond is given in the movie franchise.

But the graphic then hits Sancho where it hurts by revealing that on this occasion 007 stands for ‘0 goals, 0 assists, 7 games.’

Sancho has also been out of form in the Champions League this season and hasn’t registered a goal or assist in his side’s opening three European games.

He also blanked when United were knocked out of the Carabao Cup by West Ham in August.

The winger’s form will be a concern for boss Ole Gunnar Solskjaer, who needs everyone firing if he is to save his job as Manchester United manager.

Solskjaer was powerless to prevent his team suffering the ignominy of being thumped 5-0 by Liverpool at the weekend and United are now eight points behind Premier League leaders Chelsea.

Jadon Sancho has failed to score or assist since signing for Manchester United (Image: GETTY)

“The truth of the matter is, it doesn’t work for some players. You only have to look at the likes of Wilfried Zaha and Memphis Depay. They came to Manchester United when they were young and they could not handle the expectation.

“I am not saying that is the case with Sancho for one minute but he may need time. He needs to adapt his game.

“The pressure is huge at the best of times but now, with the pressure the manager is under, the results have not been good enough.

“It is a difficult situation for him at United right now - he is not playing well.”