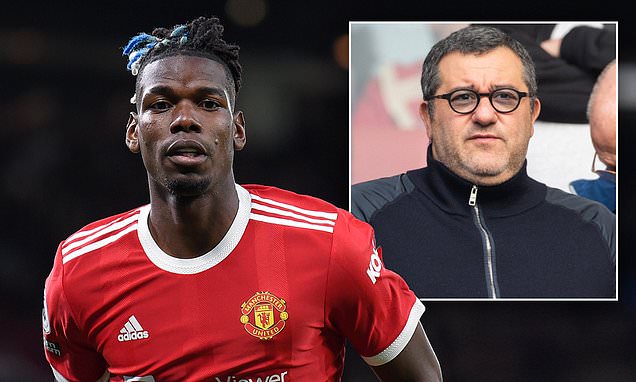 Paul Pogba's agent Mino Raiola has insisted that there is 'no update' in regards to the midfielder's ongoing contract situation at Manchester United.

The Frenchman's current deal at Old Trafford expires at the end of the season and he is yet to commit his future to the club, raising the prospect he could leave for free in the summer.

If Pogba fails to agree to an extension before January, he will be allowed to discuss terms and sign a pre-contract with a new club ahead of a move next summer.

It has seen the 29-year-old linked with moves to Real Madrid, Barcelona, Juventus and Paris Saint-Germain, while United are keen to keep the midfielder.


However, even with the clock ticking, Raiola has claimed that there has been no movements in discussions over a new deal and that there is no rush to do so at the moment.

When asked about talks over a new deal, Raiola told The Times: 'You would have to ask Manchester United about it. At this moment everything is calm. There is no update.'

The powers that be at Old Trafford are keen to secure the Frenchman to a new long-term deal, with a £400,000-a-week deal reportedly set to be put on the table.

His mood towards a potential stay with the Red Devils has brightened given the recent arrival of Cristiano Ronaldo. However, talks around his future continue and his recent sending off in the humiliating 5-0 defeat at home by Liverpool have once again sparked the rumour mill.

According to reports from ABC earlier this month, Real are ready to offer Pogba just under £12million-a-year with a transfer bonus of just over £25m to convince him to swap Old Trafford for the Bernabeu at the end of the season.

The Spanish outlet claims that Raiola is pushing for the deal to happen and that Real are hoping to pair Pogba and Kylian Mbappe with their France team-mate Karim Benzema.

While he has shone brightly on the international stage, Pogba's second spell at Old Trafford has been blighted by inconsistency and he has never quite managed to hit the heights he reached at Juventus.

Raiola has repeatedly hinted his client may leave Old Trafford, suggesting in the past that Pogba was 'done at Manchester United' and that he needed a fresh challenge.

Following his capitulation against Liverpool, which saw him sent off just 15 minutes after coming on as a substitute, club legend Paul Scholes said he wouldn't be upset if that was his last outing for the club.

He told Premier League Productions: 'To say a disappointing day would be a complete understatement.

'I think we all realise it's been difficult, I just think the manager got caught up in the emotion of the comeback [against Atalanta in the Champions League] on Wednesday night.

'We keep going back to that game but you were never going to do that against Liverpool, they have too much quality.

'I don't think it was a lack of effort, I think tactically they were set up in a way where this could happen and unfortunately it did happen.

'Paul Pogba coming on to the pitch at half-time to try and help the team and maybe get a little respectability about it, tries to stand on the ball, tries to show how strong he is in the middle of the pitch… gives the goal away.

'Then later on gets sent off with a ridiculous tackle. Now you're 5-0 down with 10 men. You'd have to think, if Ole's still a manager there, will we see Pogba again in a United shirt?

'He's caused mayhem over the last couple of years. Everyone knows what a talent he is, everybody trusts him, every manager trusts him, tried to give him his head and let him be the player he's been.

'But with all the commotion, not signing his contract, almost holding the club to ransom, and then he comes on and does something like that.

'It's not Ole's fault, don't get me wrong, but that's part of it which almost summed the United performance up today.

'Look, he probably will play [again] won't he? But I don't think they will be missing anything if he doesn't.

'He's had numerous chances, he keeps saying he lacks consistency, but that is just [a lack of] discipline and disrespect for your manager and your team-mates, what he's done today.'