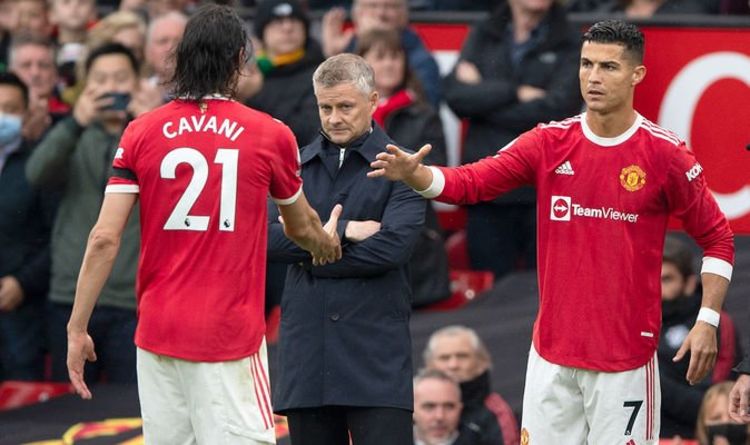 Manchester United boss Ole Gunnar Solskjaer has been told to drop Cristiano Ronaldo to save his Old Trafford future. Solskjaer is under pressure following Sunday's 5-0 loss at home to Liverpool. The Red Devils are already eight points off Chelsea at the top of the table.

Antonio Conte has been linked with the United job but Solskjaer is set to remain in charge for this Saturday's trip to Tottenham at least.

Solskjaer's team selection against Liverpool was criticised after he picked the same starting XI that went 2-0 down to Atalanta in the Champions League in midweek.

And he reckons dropping Ronaldo in favour of Edinson Cavani would be the place to start.

JUST IN: Man Utd boss Solskjaer told two signings he should have made instead in summer

“I think for Ole, he’s got some big decisions to make,” Bent said on talkSPORT.

“If he wants to play this whole pressing game then he might have to bite it a little bit and go ‘you know what, Ronaldo has been good but Cavani in terms of energy, pressing, working hard from the front, is a far better option than Ronaldo, because whenever Cavani comes on, he runs around, he works.

“Ole Gunnar Solskjaer, if he wants to survive much longer in this role he’ll have to start making some big decisions and that includes leaving big players out.”

Paul Pogba was left out of the starting XI on Sunday and was sent off 15 minutes after being brought on at half time.