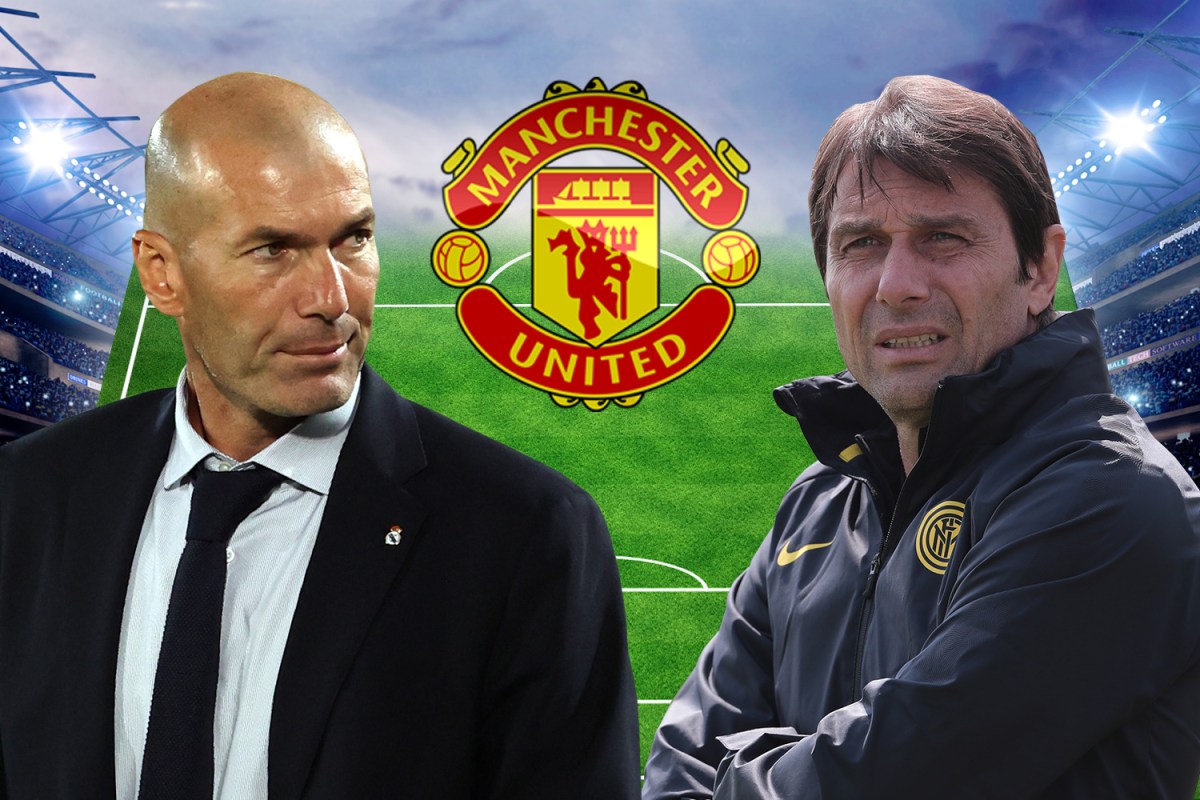 MANCHESTER UNITED have drawn up a four-man shortlist to replace Ole Gunnar Solskjaer - but which has managed the best players?

The Norwegian chief, 48, is under increasing pressure at Old Trafford following the 5-0 humiliation at home to Liverpool on Sunday.

Man Utd have set their sights on FOUR bosses to replace Solskjaer should they decide to swing the axeCredit: Reuters

United are now without a win in four Premier League games, losing three of those - slipping eight points behind leaders Chelsea down in seventh.

Red Devils chiefs are keeping tabs on Antonio Conte, Zinedine Zidane, Brendan Rodgers and Erik ten Hag to replace Solskjaer, should they decide to sack him.

Whichever boss arrives will need to navigate a squad full of superstars, including Cristiano Ronaldo and Raphael Varane.

But which of the four potential new United chiefs has coached the best players during their careers?

CONTE has coached superstar teams such as Chelsea, Inter Milan and Juventus in recent years, as well as the Italy national team.

So picked a best XI was no easy feat.

In goal, Italy and Juventus legends Gianluigi Buffon, Leonardo Bonucci and Giorgio Chiellini all get the nod.

He starts at right-wing-back, with Marcos Alonso - integral in Chelsea's Premier League crown of 2016-17 - on the left.

They beat Paul Pogba (Juventus) into the team.

In attack, Eden Hazard - another key cog of Conte's Prem-winning season - starts on the left, with Carlos Tevez (Juventus) on the right.

Romelu Lukaku, fresh from leading Inter to their first Serie A crown in 11 years, takes the centre-forward spot in our team.

WELL this is a much simpler task, with Zidane having only ever managed Real Madrid.

The XI chosen is essentially the first team from his 2016-17 season - the year of his LaLiga-Champions League double.

And the 'BBC' trio of Karim Benzema, Gareth Bale and Cristiano Ronaldo start in a star-studded attack.

And the squad has a real Reds feel about it, with Rodgers almost guiding the club to their first Premier League title in 2013-14.

The 'SAS' - Daniel Sturridge and Luis Suarez - start in attack, with Raheem Sterling joining them - meaning there's no room for Jamie Vardy.

The midfield three is also an all-Liverpool affair, with Steven Gerrard, Jordan Henderson and Philippe Coutinho keeping the likes of Youri Tielemans and James Maddison out of the team.

Ex-Celtic ace Kieran Tierney starts at left-back with Jamie Carragher (Liverpool) in the heart of defence.

TEN HAG kicked off his managerial career at Dutch side Go Ahead Eagles, before taking charge of Bayern Munich II for two seasons.

He later spent two seasons at Utrecht before eventually taking over at Ajax in 2017.

Only ONE non-Ajax star makes it into this XI - Pierre-Emile Hojbjerg.

The Tottenham star played 44 2. Bundesliga games for Bayern's second string side before cracking the first XI and later moving to Southampton.

Elsewhere, though, it's wall-to-wall Ajax, with a very strong 2018-19 vibe, as Andre Onana gets the nod between the posts.

Now-Barcelona ace Sergino Dest starts at right-back with Nicolas Tagliafico on the left.