The Fiver | Farewell Walter Smith, one of football’s underrated greats
The Guardian 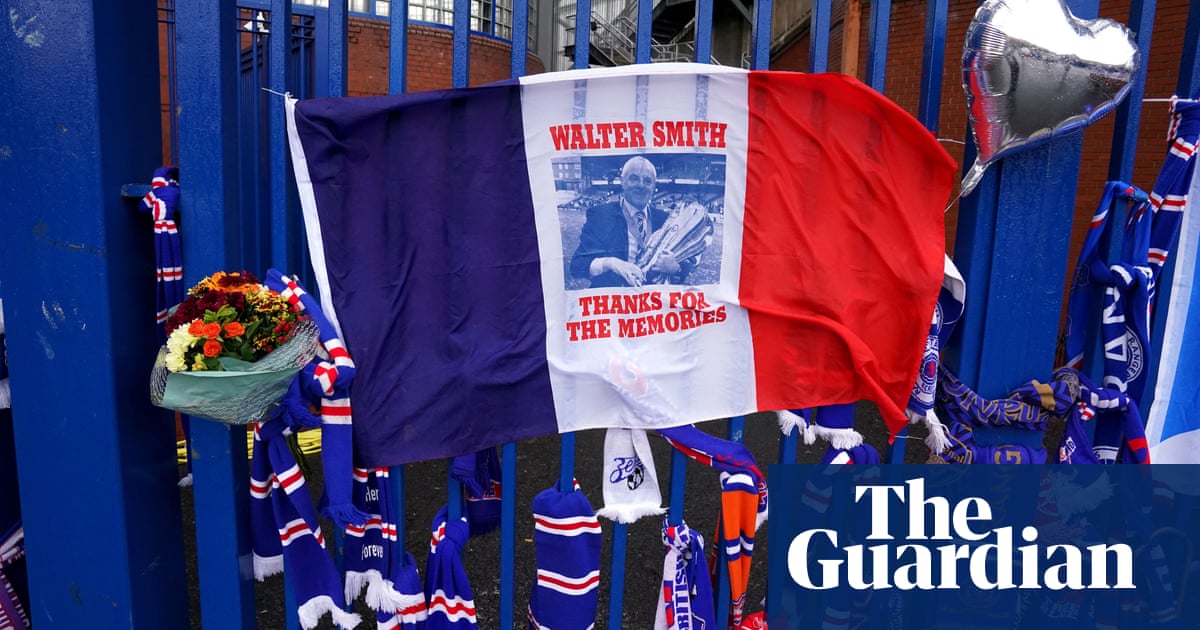 One of football’s most dependable white knights has dismounted his charger for the final time. Walter Smith: now there was a man you’d be happy to see galloping into view when things were in danger of going a sour way out. Take Rangers, who he calmly steered to silverware after Graeme Souness left for Liverpool during the 1990-91 title run-in. Or Scotland, for whom he picked up the very many small pieces left behind by Berti Vogts, the team rising 70-odd spots in the rankings in short order, with the Kirin Cup thrown in. Or Rangers again, whisking them from Paul Le Guen to the Euro Vase final in less than 16 months. As speedy base-metal-to-gold transformations go, that registers a full 10 on the Fiver’s patented and fully trademarked Tuchelometer.

Smith, who has died at the age of 73, was an old-school diplomat, not past delivering a brisk clip around the lug for the purposes of speedy philosophical resolution. He didn’t suffer foolish questions gladly, as poor Chick Young famously discovered when he found himself on the receiving end of that low-volume two-minute seethe, the most intense and frankly worrying kind of seethe, Archie Knox providing light and shade with a beat-perfect comic cameo. And yet he kept it all in perspective, thick as thieves with his mid-90s Old Firm adversary Tommy Burns, getting his pal in to assist with the Scotland gig, and helping carry his coffin when he passed in 2008. Good luck finding someone with a bad word.

The Everton years didn’t quite go to plan, fair enough, but the club was a basket case at the time (behave) with the fixtures, fittings and Duncan Ferguson being sold from under his feet and, in any case, upon leaving he insisted on helping chairman Bill Kenwright source his replacement, and the David Moyes era wasn’t so bad. He assisted Manchester United to the 2004 FA Cup, too, but it’s his work north of the border that will be his true legacy: assisting Jim McLean as they built Dundee United into a championship-winning and Barcelona-bothering force, then leading Rangers to nine in a row, plus a few more, and finally lending current Gers boss Steven Gerrard his ear during last season’s epochal title charge. Not that Smith would boast about any of it; as modest as they come, he was, as a result, one of the underrated greats. But a great nonetheless.

Join Paul Doyle for hot MBM coverage of Latvia 0-7 England in the Women’s World Cup qualifier from 6.30pm (BST). Scott Murray will guide you through Arsenal 3-2 Leeds in Rumbelows Cup fourth round (7.45pm).

QUOTE OF THE DAY

“The quality of our front three … we said they look like raptors in Jurassic Park. They go for it, they are lethal. If you score in the right moments then these games – for example Man United – can happen” – Liverpool assistant Pep Lijnders gives the club’s forwards the Hollywood treatment. So, who is Donald Gennaro?

Sam Neill. Or Harry Maguire. We’re not sure Photograph: ILM/Amblin/Universal/Kobal/Shutterstock

Football Weekly is taking a European road trip – join Max, Barry and co as they chat el Clásico, the Derby d’Italia and other games with less catchy names.

“The current Manchester United squad are an ill-assembled collection of superstars and fancy dans who cannot function as a team. What they need is a manager who has experience in pulling an underperforming team of individuals together, so that they work for each other as a gritty, cohesive unit. David Moyes, anyone?” – Chris Brock.

“A year on from the sad death of Diego Maradona, it is very nice to see a touching upcoming tribute by his former clubs Barcelona and Boca Juniors, who will be playing a tribute friendly in ... Riyadh? Still, at least it will give local Newcastle fans something to take their minds off impending relegation” – Noble Francis.

“Did anyone else receive their Fiver-branded 3D glasses so they could properly see that photo of Fran Kirby (Monday’s Fiver)? Mine seemingly went as awol as Manchester United’s defence on Sunday” – Jim Hearson.

Send your letters to the.boss@theguardian.com. And you can always tweet The Fiver via @guardian_sport. Today’s winner of our letter o’ the day is … Chris Brock, who wins a copy of John Nicholson’s excellent Was Football Better in the Old Days?

Tributes have poured in from across football for Walter Smith, with Ally McCoist leading the way. “He was my boss, my coach, my second father and then turned into one of my best friends,” McCoist said on TalkSport. “The loss is absolutely incredible.”

Ole Gunnar Solskjær has received the backing of Lord Ferg and an assortment of Manchester United suits, but co-chairman Joel Glazer will have the final say on whether the manager stays at the wheel.

Tommy T has backed Andreas Christensen to become a captain, leader, legend at Chelsea. “He can be a top defender for us … there are big examples in this club of what it takes to be a legend in defence,” Tommy full-kitted.

And Pep Guardiola has been stating the obvious before undisputed Carabao Cup champions Manchester City’s tricky trip to Taxpayers FC. “The League Cup is a tournament in this country and we have done quite well,” he Pepped. “We won it for the fourth time in a row, and still we are there.”

The signs for Solskjær are neon, flashing and all point to the fabled Door Marked Do One, writes Daniel Harris.

Mohamed Salah became the highest-scoring African player in Premier League history with his hat-trick at Old Trafford. Ed Aarons looks at what it means for his legacy.

“Perhaps one of the reasons David Moyes’s success has flown under the radar a little is that to analyse it would mean analysing how so many of us got it wrong” – it’s Jonathan Liew on the Moyesiah.

Ever wonder just where commentators summon those eye-catching stats from? Richard Foster talks to Peter Drury and the number-crunchers behind the scenes.

And if it’s your thing … you can follow Big Website on Big Social FaceSpace. And INSTACHAT, TOO!