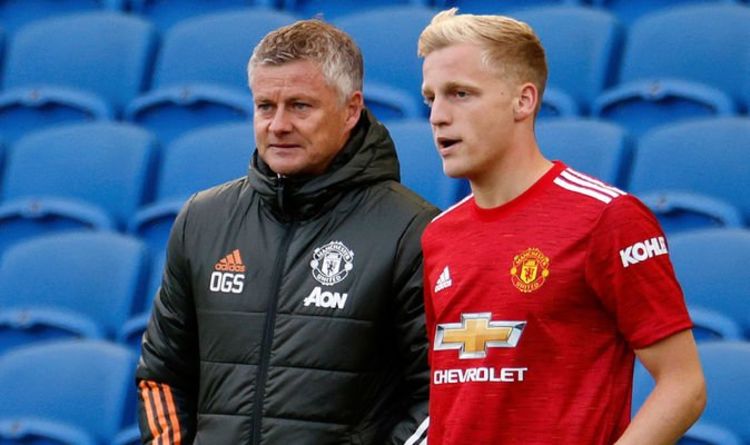 Manchester United boss Ole Gunnar Solskjaer seems to be swatting away pressure from every angle after a 5-0 humiliation at home to bitter rivals Liverpool put his job in jeopardy. As the club's owners reportedly weigh up a change, there are allegedly problems from within the Old Trafford dressing room due to the handling of outcast Donny van de Beek.

The Dutchman was once again an unused substitute as Jurgen Klopp's side ran riot on Sunday afternoon.

After even more attacking talent was recruited during the summer, Van de Beek has only appeared twice this campaign in all competitions.

Having notched just one United goal since signing from Ajax over a year ago, it is a poorly kept secret that the 24-year-old is not a happy camper in Manchester.

That will only be made worse by the fact that, according to The Daily Mail, Solskjaer 'promised' Van de Beek more game time way back in January this year.

The Norwegian subsequently denied his midfielder moves away in two consecutive transfer windows, leaving the player to fade into obscurity from the bench.

As a result, ESPN claim that the atmosphere within the dressing room is deteriorating, with fellow peripheral figures Jesse Lingard and Nemanja Matic not happy either.

Amid a torrid run of form which has seen the Red Devils lose five of their last nine games, Solskjaer has refused to give bench-bound figures a chance to turn things around.

"I do believe in myself, I do believe that I am getting close to what I want with the club," he said.

"I have come too far to give up. I am not built that way. The feeling we have had is we were getting where we wanted to be but in the last few weeks results haven't come and we have hit a brick wall. We have conceded too many easy goals and that is a concern.

"I am still thinking about tomorrow's work, we are all low. This is the lowest I have been but I accept the responsibility, that is mine and mine going forward."