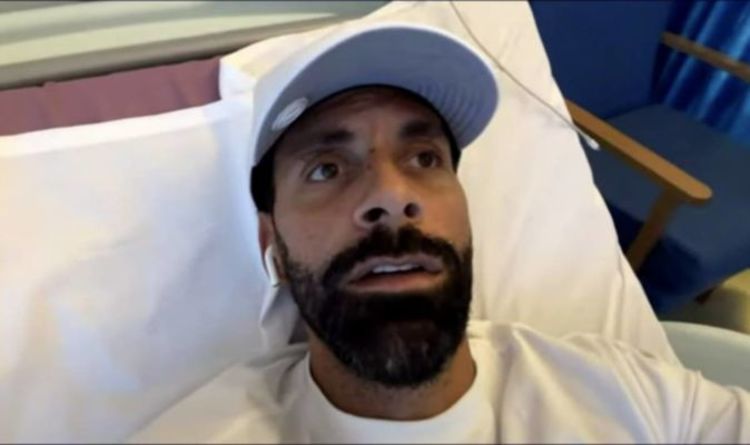 Rio Ferdinand has admitted it is not looking good for Ole Gunnar Solskjaer. The Manchester United gave his thoughts from a hospital bed where he watched his old side get demolished by Liverpool on Sunday.

Manchester United legend Rio Ferdinand has waded in on the debate of whether to sack Ole Gunnar Solskjaer or not amid reports he is clinging to his job.

The 5-0 thrashing from Liverpool on Sunday at Old Trafford has seriously affected the club, from top to bottom.

Even the fans have started to turn on Solskjaer, with many voting with their feet by half-time when the stadium became more and more empty as the clock ticked on.

The Norwegian has often had support from his old teammates working as pundits including Gary Neville, Roy Keane and Ferdinand.

Rio Ferdinand was crocked over the weekend and had to spend Sunday in A&E (Image: YOUTUBE)

But even the latter could not defend his buddy anymore and admitted that it is not looking good for the Red Devils coach.

"It don't look good for us at the moment," he said on his YouTube channel.

"Things have got to change but I'd love to be a fly on the wall on that training ground now because there must be arguments.

"Training will be feisty and if it ain't, there's something wrong with the club because you ain't got the right people in.

"At all the big clubs, if there's problems, players are looking for answers and you're getting into people at the training ground because all of your pride is hurt.

"I'm not saying go around and beat each other but there's a snarl that goes around that pitch when you're out there and I'd want to see that response if I was the manager now.

Antonio Conte has been heavily linked with taking over should Solskjaer be sacked with many believing this is the time to dismiss the coach.

But Ferdinand has insisted his players must do more to help out the club in their current predicament.

He added: "People are calling for Ole to be sacked etcetera, that's for the club to decide.

"I'm not into saying managers need to be sacked etcetera but what I do know is that Ole has come in and improved stuff from where it was.

"He's now amassed a fantastic group of players, but the only problem is that they're not playing as a team.

"That's the job of a manager and he needs to find a way of doing that. Players do take responsibility as well but you've got to be set up to be able to perform at your best."