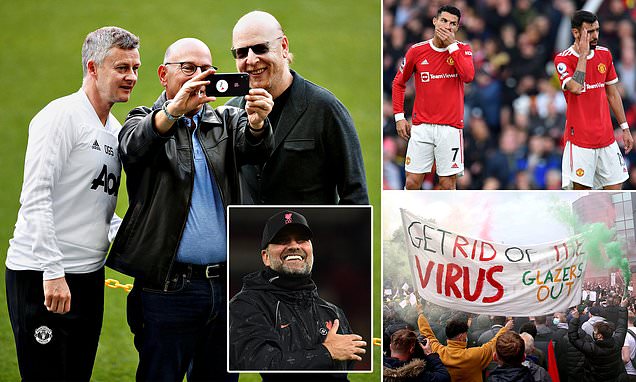 When Liverpool's American owners first arrived at Anfield, they sat down in an executive suite with the journalists who covered the club and asked for their opinions on what could be done better.

When Manchester United's American owners first arrived at Old Trafford, they bought a couple of 'I love Man United' T-shirts and an £18 plastic souvenir rucksack and sped away in a VW people carrier.

Here, in essence, is the reason why such a chasm has developed between English football's two great adversaries.

Liverpool's success is the product of the strategic oversight and intellectual rigour of proprietors who have brought the same intensity to football as to finance.


United's serial failure is the product of the neglect and absentee status of a Glazer family propped up by Sir Alex Ferguson's genius for eight years and who then got found out.

It didn't take Sunday's tactical shambles to tell us that the chickens have come home to roost. The Glazers believe the only creativity required in this particular business is the pursuit of the next noodle, tyre or paint partner.

Their competitors at Liverpool, Manchester City and Chelsea, meanwhile, have been more interested in installing individuals who are steeped in football at the top of their corporate structures.

While Liverpool, under Bostonian Mike Gordon, secured the best manager, an immensely competitive football method and the best players to deliver it, United under Ed Woodward, the ex-JP Morgan man, just looked for the next big splash.

The £24m in wages laid out for a season of Radamel Falcao's services was equivalent to the entire transfer fee Manchester City spent on Yaya Toure. The £89.3m lavished on buying back Paul Pogba was nearly three times Liverpool's outlay on Mohamed Salah.

Jurgen Klopp knew confection when he saw it. 'An adult version of Disneyland,' is what he felt Woodward's United to be when approached to replace David Moyes in 2014. So the club have lurched from manager to manager, each with as little time for his predecessor's players as the next.

Ole Gunnar Solskjaer was the 'nice one' bringing joy back to a place stripped of that quality by Jose Mourinho. Anyone with a knowledge of what it takes to succeed in sport — not least Ferguson — will tell you niceness gets you nowhere.

Owners with an interest in something more than the £100m that the Glazers drain from Old Trafford each year would have long since drummed Woodward out. Three calamitous managerial appointments is way beyond carelessness, and his pathological meddling in the business of buying players has been catastrophic.

Yet the club limps on, appointing a string of old players to run the team in the vague, superstitious belief that somehow this will recapture those golden Ferguson days. Starved of effective corporate oversight, United look back instead of ahead.

Such oversight would also have told the ruling dynasty that Woodward has presided over Old Trafford becoming an aged, careworn place, in desperate need of upgrade and renewal at a time when Arsenal and Tottenham's stadiums are miles ahead.

The technically challenging expansion of Anfield is something Fenway Sports Group have applied themselves to and that stadium is hugely enhanced. The so-called 'Theatre of Dreams' is a metaphor for what is rotten at the heart of Manchester United. The need to replace Solskjaer has been patently obvious for months.

Brendan Rodgers or Mauricio Pochettino would bring something infinitely sharper and shrewder and begin the process of salvaging the wreck. But even amid the wreckage of United's most humbling performance in generations, you wonder whether the Glazers have the remotest idea of that.

As the team was being thrashed on Sunday, they were busy weighing up whether to splash out more than £300m on an IPL franchise ahead of an auction next week. (It emerged yesterday that they had been outbid.)

As they sped away with their souvenir shop tat more than 15 years ago, Sir Bobby Charlton ambled out on to Sir Matt Busby Way, where he met fans deeply concerned about what the future might hold with these people at the helm.

'I don't expect we'll see much of them,' he said. Those words were more prescient than he possibly knew.