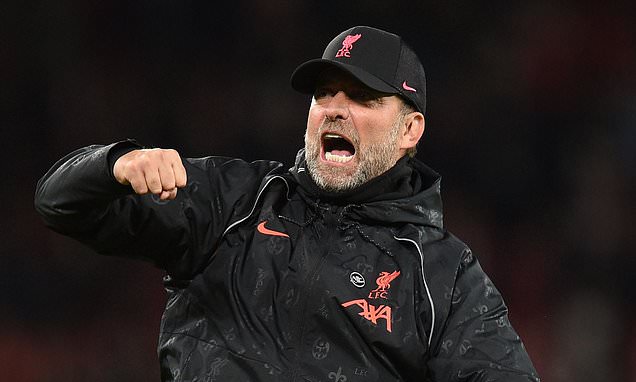 Liverpool manager Jurgen Klopp knows their 5-0 battering of 10-man Manchester United was one for the history books but has not yet had chance to assess the enormity of the result.

A hat-trick for Mohamed Salah, making it 15 in 12 appearances this season and the 10th successive match in which he had found the net, and goals for Diogo Jota and Naby Keita secured the biggest win over their arch rivals at Old Trafford.

Salah's treble was the first scored by a Reds player on the ground since Fred Howe in a 5-2 win in November 1936, the club's previous record win.

Overjoyed visiting fans sang songs celebrating the performance while also mocking United and Klopp could not resist delivering his trademark triple fist-pump at the final whistle having initially appearing to think twice about pulling out the move on opposition territory.


While the Reds boss was unable to offer a valid assessment on where the result ranked in his career, he did say his side were 'exceptional'.

'I got told that it never happened before in the history of LFC. This group always wanted to write their own chapter so this was a little chapter tonight.

'People will talk about it in the future, 100 per cent because it does not happen very often.

'We saw the game and we were lucky in two or three situations in the first half when United could have scored - they should have scored the first one (which fell to Bruno Fernandes) but it doesn't make our performance smaller.

'In front of the goal, in the last third, we were exceptional. Clinical and ruthless, the high press was outstanding, formation top, all these things you want to see as a coach.

'The difference is you don't usually score in each situation and we did.'

The match was not without its downsides for Liverpool, however.

James Milner was forced off with an injury just 27 minutes in while fellow midfielder Keita was carried off on a stretcher having been on the receiving end of a two-footed lunge from half-time substitute Paul Pogba, who was sent off.

Klopp is still waiting for Thiago Alcantara to return from five weeks out with a calf injury while Fabinho missed the match with a minor knee problem so his resources in that department are becoming stretched.

'Second half, early 5-0 and the red card - game over, so just control it and try to get home healthy,' he added.

'I am not sure 100 per cent that worked out because Millie is inured and Naby as well. We have to see how serious it is. It is very painful but we will see.'

Klopp also initially thought Cristiano Ronaldo's challenge on Curtis Jones at the end of the first half warranted a red card but had been persuaded otherwise by people who had seen television replays.

The United forward sent the midfielder tumbling to the floor with a wild swing of his right leg and then, with his frustration boiling over, he took a couple of swings at the ball which was positioned against his grounded opponent's midriff.

'I saw it, of course, and it looked like a red card but I got told he hits the ball or didn't hear the whistle,' Klopp said.

'I don't want Cristiano getting a red card. For me it looked like (a red) but I got told it was not and that's fine.'