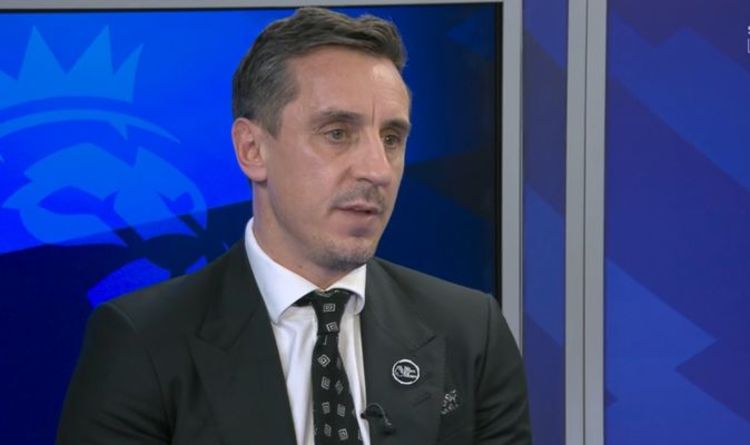 Gary Neville placed the blame for Manchester United's shortcomings firmly at the feet of Ole Gunnar Solskjaer during their 5-0 defeat at the hands of Liverpool on Sunday evening. The Red Devils were torn apart by their bitter rivals on their own patch, with goals from Naby Keita and Diogo Jota firing Liverpool ahead before Mohamed Salah's hat-trick put the result beyond all doubt at Old Trafford.

United's evening went from bad to worse when Cristiano Ronaldo was subsequently denied a consolation goal by VAR before Paul Pogba was sent off for a reckless challenge on Keita, who went on to leave the pitch on a stretcher.

The hosts were a far cry from their usual selves for the duration of the match, with Solskjaer's men simply unable to respond to the merciless punishment being inflicted upon them by Liverpool.

The visitors were utterly dominant from the very first whistle, whereas United were totally devoid of any creativity or defensive intelligence and never looked like gaining a foothold on proceedings.

Neville was left enraged by United's performance while on commentary duties for Sky Sports, with the eight-time Premier League winner insisting that Solskjaer deserves to shoulder a large portion of the blame for Sunday's historic defeat.

"There's no doubt the manager will get absolutely battered," said Neville during the second half of the match.

Neville had plenty of questions for Solskjaer during the match (Image: SKY SPORTS)

"There will be calls for his head like you would not believe in the next 24 hours. So much has happened today from a United point of view in terms of how it’s bad it’s been.

"There's no doubt Ole and his coaching staff have to take blame for the lack of press. Whatever happened at Leicester has happened today.

"I can't believe the tactics. Ole Gunnar Solskjaer has played counter-attack since he's been in the job, so why hasn’t he gone for that today?"

Sunday's result marked the first time that United were beaten by Liverpool by such a margin since 1895, with the Red Devils certain to be looking for a positive response against Tottenham in six days' time.

Solskjaer, who faces even greater pressure to deliver rapid results after United's latest humbling, admitted at full-time that his players were nowhere near good enough to warrant anything less than a heavy defeat at the hands of their biggest rivals.

"I am sad, disappointed, angry of course," the Norwegian boss told Sky Sports.

"My emotion doesn't matter apart from what do we do to improve and make sure it doesn't happen. This could go either way, we could sulk or we could come together.

"They were clinical and you have to say games are decided in front of goal. They were very, very ruthless.

"We had to go for it. You don't lay down to only lose 2-0. The third goal was the nail in the coffin. We created chances but we made it too open a game.

"You have to work on players' minds. We have big games coming up, so no time to sulk, no time to feel sorry for yourself. We have to come together.

"These players have to come too far to give up. I have seen their development through the years.

"They stick together, look after each other. Today they weren't good enough."