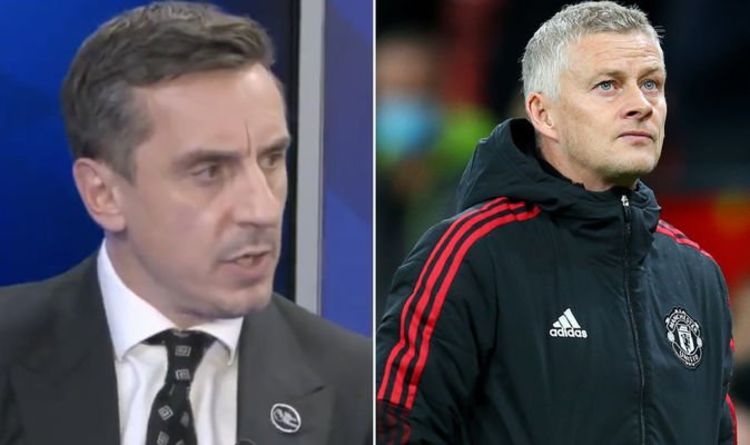 Manchester United will not sack Ole Gunnar Solskjaer before the end of the season, reckons Gary Neville, despite their heavy 5-0 defeat to bitter rivals Liverpool on Sunday night. The Red Devils were humiliated on their own turf at Old Trafford but Neville is confident Solskjaer will not lose his job.

Mohamed Salah scored a hat-trick as Liverpool recorded their biggest ever win away at United and put an eight-point gap between the Red Devils and top-of-the-table Chelsea, who the Reds are one point behind.

Despite such a margin to the league leaders only nine games into the campaign, Neville does not think Solskjaer - who was backed with the signings of Jadon Sancho, Raphael Varane and Cristiano Ronaldo in the summer - will be axed by the Glazers.

Speaking on Sky Sports, Neville said: "They're not close to winning the league or Champions League and nowhere near the other three teams at the moment. It was painful watching that interview, to feel questions like that but it's part of the game.

"You're at Man United it's a big boy game and a big boy club and if you lose to Liverpool 5-0 at home you’re going to come under big pressure. If this was post-Sir Alex [Ferguson] aftermath, Ole would be in massive trouble tonight.

"I think the club will hold their nerve and I don't think they've planned for another manager this season and they'll sit with Ole until the end of the season.

"There will be a massive outcry from fans and media from everybody that he should be sacked and I can understand why after that game. It takes some recovery.

"I lost 7-0 in Barcelona once and I knew I was done [as Valencia manager]. I'd like to hear from the board to communicate with the fans to say if they are going to back the manager over the next six months.

"The media have asked questions and the feeling is they believe in the project. Ole believes he's close, I remain to be convinced. Man United aren't good.

"This team finished second and added a great player everyone was buzzing with five weeks ago the reality is something has to change.

"For me - the board, how the players react to the game, Maguire and Ronaldo coming out and speaking. How Ole reacts, we've not seen his interview yet, but that's the big thing."

Underfire Solskjaer meanwhile said post-match: "It's not easy to say something apart from it's the darkest day I've had leading these players. We weren't good enough individually or as a team. We can't give Liverpool that many chances and unfortunately we did.

"The whole performance wasn't good enough, that's for sure. We created openings, they were clinical. We didn't take our chances early on. Then that third goal is the one that decided the game.

"You can look back at the 6-1 with Tottenham, this one is worse. Miles worse. Opposition as well makes it miles worse for me as a Manchester lad. We've got to get over this as quick as we can and move on."

Asked about his future he added: "No. I've come too far, we've come too far as a group to give up now. It's gonna be difficult [to turn it around], I understand human nature, players will be low, but you look into the eyes and character of them.

"I know we're rock bottom, you can't feel any lower than this, and let's see where we take it."