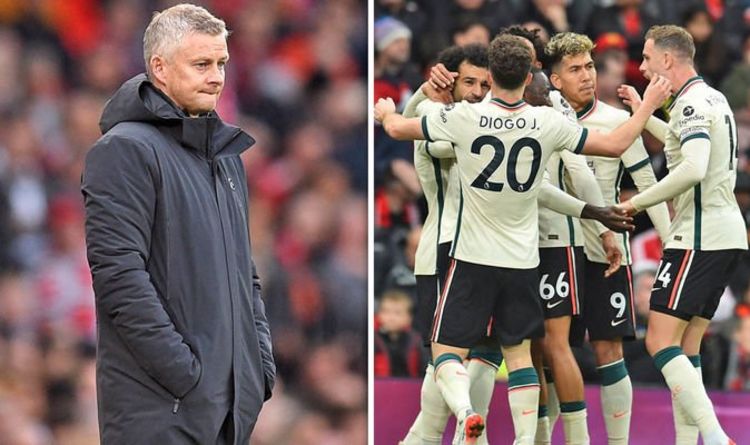 Manchester United have stooped to a new low under Ole Gunnar Solskjaer following their emphatic defeat to Liverpool on Sunday. The Red Devils were second best all game and were thumped by their fierce rivals on their own turf. And, if Solskjaer survives this, it’ll be quite some statement from the home side.

United went into their match with Liverpool looking for another win, having beaten Atalanta last time out.

But they were put to the sword, with the visitors superior in every department.

Mohamed Salah was the star of the show, with the Egypt international producing a fine hat-trick to upstage Cristiano Ronaldo.

And Naby Keita and Diogo Jota were also on target, while Paul Pogba was dismissed for United in the second half.

So Express Sport will now take a look at four things we noticed from the sensational showdown at Old Trafford.

United must certainly wish they’d been successful when they tried to hire Jurgen Klopp as their manager in 2014.

Klopp said he declined them because he didn’t fancy their project, saying it was sold to him as being like ‘Disneyland’.

And given the job he’s done at Liverpool, the Red Devils must be kicking themselves.

Klopp is arguably the best manager on the planet. Passionate, tactically astute and knowledgable, he’s an upgrade on Solskjaer in every way.

If the club had a time machine, they’d likely use it.

Before the game, many were talking about whether Salah is better than Cristiano Ronaldo.

And answer, after this game, is yes.

Ronaldo in his prime maybe had the edge but the Egypt international is on a different level these days, as his hat-trick showed.

Liverpool, in general, are superior to United in every way.