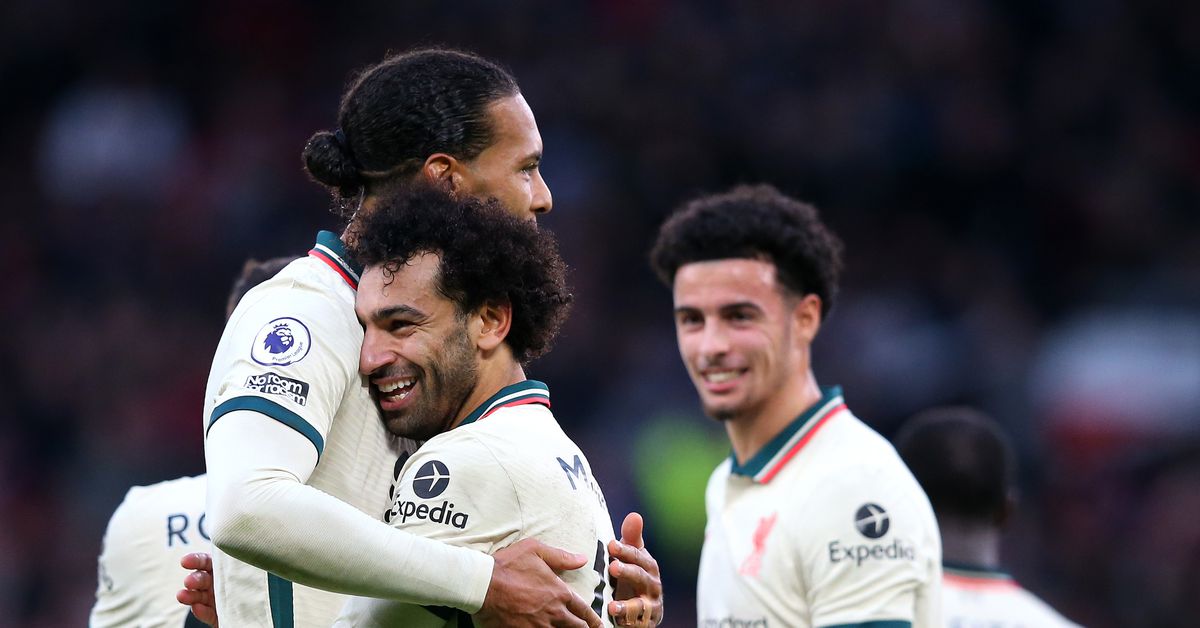 It’s the Northwest Derby, and Liverpool are third in the table, but with a game in hand, so they could go second after a win today. Ibrahima Konate gets a Premier League start, with Joel Matip and Joe Gomez on the bench. Among the front three, Sadio Mane loses his spot to Diogo Jota. Curtis Jones returns from injury to feature on the bench. Fabinho is out of the lineup with a minor knee issue as per the club’s latest update.

Despite a suggestion from Ole Gunnar Solskjaer that Bruno Fernandes was unfit, he seems to be in the lineup for United today.

Liverpool start the first half looking organized. Konate is involved right away - heading off a few attempts, but losing a couple of balls as well. 5 minutes in, Salah streaks past Luke Shaw and advances the ball forward - Naby Keita is close to the net to receive it unmarked and taps it in - GOAL! Keita continues to play with purposeful aggression and makes a number of key passes. At 13’, Trent hits the ball in from wide right, and Luke Shaw and Harry Maguire are unable to defend it - Diogo Jota taps it in and GOAL! United keep chasing Liverpool, and make a few limp attempts at goal, but none are on target. 20 minutes in Liverpool have 4 attempts, 3 of which are on target.

Milner is subbed off with a leg issue at 20’ and Curtis Jones comes on. At 38’ a delightful one-touch team sequence sees Firmino, Jota, Keita and Salah involved, at the end of which Keita whips in the ball from wide right and Salah nets it - GOAL! This is the 10th consecutive game in which he has scored this season - yet another record.

Towards the end of the half, Cristiano Ronaldo tangles with Curtis who is on the ground, and Ronaldo kicks him in the groin. It should be a red, but he gets away with a yellow card. Amidst the fury, United concede another Salah GOAL from a Liverpool corner at 49’. A tremendous first half.

The half kicks off with Liverpool still marauding forward and at 50’ we have another Salah GOAL! Personally I did not see it in real time because the goals are coming in faster than I can type. A video recap shows Henderson nicking the ball in midfield and passing it straight towards goal, where Salah is waiting in the wings to pick it up, and then he slots it in. Hat-trick for the Egyptian King!

At 52’, Ronaldo receives a long ball from midfield, shuffles it past Trent and Konate and swerves it into Alisson’s net. But it’s ruled offside.

Liverpool conducts the rest of the game like a training session, retaining possession and trying to break through the wall that United are now putting up. At 60’ Paul Pogba goes in with a studs-up challenge on Naby Keita, for which he sees a red card and Keita is stretchered off. He is replaced by Alex Oxlade-Chamberlain. At 82’ a United free-kick is directed at goal by a Luke Shaw header and then again by Cavani, but it hits the crossbar. The half ends 5-0 to Liverpool. United fans started walking out long before the final whistle.

Liverpool were decidedly the better team in all aspects. United did not show much of an intent to press or win the ball, and generally lacked a plan. Someone placed images of Sir Alex Ferguson’s face in the audience alongside Kenny Dalgish’s - Kenny’s beaming, Fergie’s not, and that’s enough to make our week now, isn’t it?