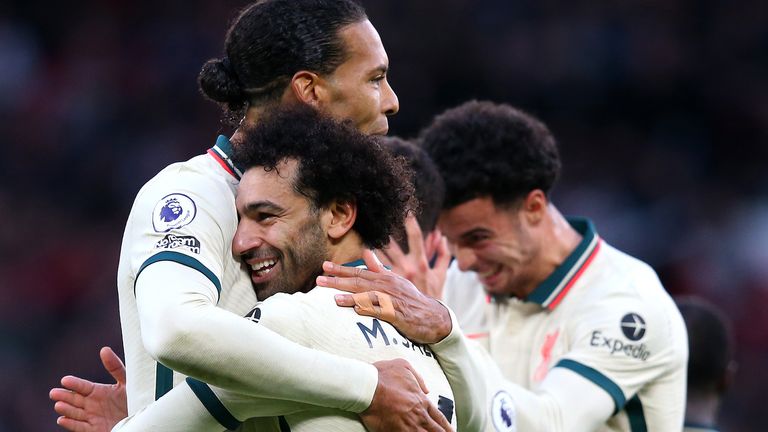 Ten-man Manchester United suffered one of their worst defeats in recent memory as rivals Liverpool piled pressure on manager Ole Gunnar Solskjaer with a 5-0 thrashing at Old Trafford.

United's performance was nothing short of a shambles as Liverpool feasted on some inept defending and questionable tactics, going ahead after five minutes through Naby Keita's low finish having been released through on goal.

Diogo Jota made it 2-0 (13) at the far post from Trent Alexander-Arnold's centre after miscommunication between Harry Maguire and Luke Shaw, before Mohamed Salah scored for the 10th straight game in all competitions, converting near post from Keita's pass (38)

Image: Diogo Jota is congratulated after giving Liverpool a 2-0 lead over Manchester United

United were "kidding themselves" by pressing Liverpool, according to Gary Neville on co-commentary after recent criticism at their lack of defending from the front, leaving gaping holes at the back as Liverpool scored a fourth just before half-time through Salah's low, pinpoint finish from just inside the box (45+5). The jeers that greeted Manchester United at the break were ear-splitting.

Salah completed his hat-trick, touching past David de Gea from Henderson's excellent pass (49), and the hosts went down to 10 men as half-time substitute Paul Pogba saw red for a high tackle on Keita, who was brought off on a stretcher (60).

United somehow saw out the game without more damage, but having conceded 11 goals in three games, and sitting eight points off the top of a Premier League they had promised to challenge for after a busy summer window, pressure on Solskjaer is at an all-time high.

Liverpool move second after a dazzling display, and remain unbeaten since May after Jurgen Klopp's 200th win as manager, reaching the milestone faster than any other Reds boss.

For many, United's comeback victory against Atalanta on Wednesday papered over the cracks, and Liverpool sensed vulnerabilities in Solskjaer's side throughout an embarrassing 90 minutes for the hosts.

But they should have gone ahead on four minutes as Cristiano Ronaldo and Mason Greenwood combined to free Bruno Fernandes on the right of the box, but he hurried his effort and lashed over with just Alisson to beat.

Keita did what Fernandes couldn't a minute later as United's defence was sliced open all too easily. It's now just one clean sheet in 21 in all competitions as Liverpool countered through Roberto Firmino and Salah, the latter threaded a wonderfully weighted ball into Keita in space in the box, and the midfielder composed himself to slow low past De Gea.

The first 15 minutes resembled a basketball match; Salah found space again before striking wide then Rashford saw his long-range effort whistle wide, before Liverpool doubled their lead thanks to some woeful United defending.

Shaw and Maguire's mishap resulted in a hashed clearance, allowing Keita to collect possession outside the box, slip in Alexander-Arnold on the overlap, and his centre was converted back post by the unmarked Jota. In truth, Liverpool were queueing up, with Milner behind Jota ready to pounce.

There were still openings for United - Luke Shaw struck just wide from range and Greenwood himself forced Alisson into a save - but their alarming defensive susceptibilities manifested time and time again.

"United have moments of madness in them," said Neville on co-commentary, and that was clear again as a Rashford back-pass from Liverpool's half played in Salah at an angle. He got into the box unopposed, but De Gea blocked him at the last. "They're a crazy team," Neville rightly added.

It got more embarrassing for Solskjaer and United as Liverpool found space in the final third again to score their third. After Maguire blocked Salah's initial shot, the ball squirmed into space for Keita, who squared for Salah to convert at the near post, reacting quicker than both Maguire and Victor Lindelof.

United's incompetence turned to petulance before the break - Ronaldo hacked at Alexander-Arnold, with Liverpool feeling the yellow he received was too lenient - but it was soon 4-0 as Salah found space on the right of the box again, firing low into the bottom right corner.

United fans let their feelings known at the whistle, booing at length at one of the most one-sided performances seen at Old Trafford in recent decades, with hundreds already leaving the ground.

As the exit gates opened, so too did the floodgates as Salah completed his hat-trick, played through by Henderson as Pogba was caught out in midfield. Salah, regarded as the best player in the world at the moment, nipped in ahead of De Gea for his 15th goal in 12 games this season.

Sensational Salah gets his hat-trick!

United thought they'd pulled one back through Ronaldo's expert finish after taking on Alexander-Arnold, but VAR intervened and he was found to be offside.

A horrible day for United had plenty of time to get even worse, and it did on the hour as Pogba's over-zealous challenge on Keita was picked up by VAR - Anthony Taylor showed him red after only 15 minutes on the pitch, but Liverpool's day was soured somewhat by the sight of the impressive Keita being brought off on a stretcher with a suspected ankle injury.

By now, with 25 minutes still remaining, the hundreds on Sir Matt Busby Way leaving the ground had turned to thousands. "Can I go with them?" said Neville.

De Gea's excellent save from Alexander-Arnold's long-range effort kept the score down, before sub Edinson Cavani hit the bar from close range for the hosts, before the nightmare ended for United. The party was just getting started for the visiting fans, however.

Manchester United were unchanged from the midweek 3-2 win over Atalanta, with Paul Pogba once again named on the bench. Marcus Rashford started, while Fred and Bruno Fernandes were fit to start.

Fabinho was missing for Liverpool with a minor knee knock, while Joel Matip dropped to the bench as Ibrahima Konata started for only the second time in the Premier League. Diogo Jota came in for Sadio Mane, who had previously played every Premier League minute this term.

"Ole's at the wheel," mocked the Liverpool fans throughout the second half, while Jamie Carragher described them as an "absolute mess" after the game. The doubts surrounding Solskjaer's long-term future will intensify as United came firmly second best to their rivals tactically, physically and technically on a humiliating day to forget at Old Trafford.

It does not get much easier; United face a formidable set of fixtures over the next six weeks as they look to keep pace in the Premier League and ensure Champions League qualification, with Chelsea, Arsenal, Tottenham and the Manchester derby looming domestically.