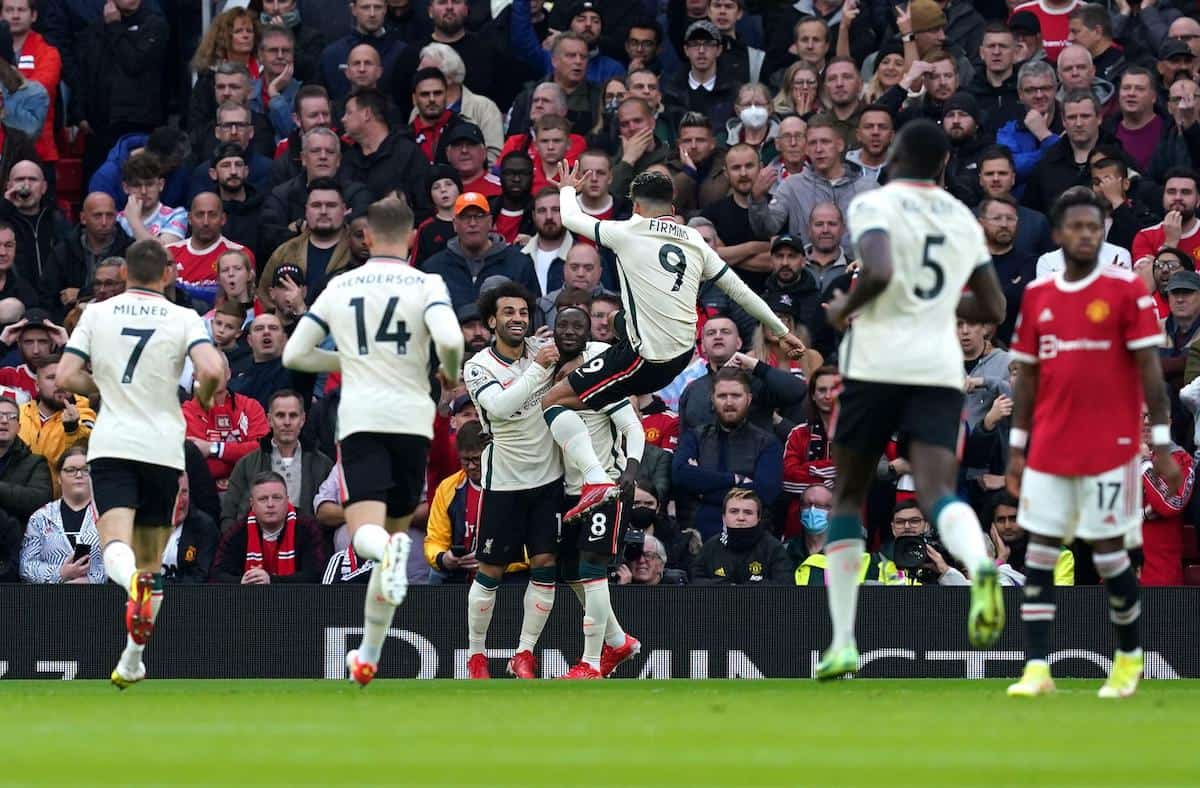 Liverpool absolutely tore apart an awful Man United side, with Mo Salah hitting a hat-trick in an incredible 5-0 trouncing at Old Trafford.

Jurgen Klopp made two changes from the side that won in Madrid earlier in the week, with Ibrahima Konate coming in for just his second league start in place of Joel Matip, and Diogo Jota replacing Sadio Mane.

Arguably, the biggest team news was the absence of Fabinho in midfield, with the Brazilian suffering a knock to the knee against Atletico.

Man United fans, who were singing about food poverty inside three minutes, saw their side behind within five minutes when a lovely passing move ended with Mohamed Salah playing in Naby Keita and the midfielder coolly slotted past David de Gea.

It was 2-0 soon after. Harry Maguire all over the place, pressed by Keita, the ball went out to Trent Alexander-Arnold and his low cross was turned in by Jota inside the six-yard box.

Liverpool were forced into an early change in midfield with Curtis Jones replacing James Milner, the 35-year-old starting his third game in 8 days and injuring a muscle when he slipped.

It was 3-0 before half time when Liverpool again proved too much for United. The ball fell for Keita inside the box on the right in acres of space and he squared it for Salah to hit home for his customary goal – the Egyptian scoring in his 10th consecutive game!

And it was 4-0 in first-half stoppage time when Salah doubled his tally, stroking home with so much space inside the box after being put in by Jota. United a mess, Liverpool clinical.

It should have been worse for United too, when Cristiano Ronaldo showed his petulance by kicking Curtis Jones after a foul was given against him, only for the referee and VAR to bottle the decision to send him off.

It took less than five minutes to make it 5-0 after the break, Liverpool again pressing and winning the ball in midfield and Jordan Henderson playing in a superb ball for Salah to claim his hat-trick.

It was Mo’s fourth hat-trick for the Reds, and the first LFC player to hit a treble against United since Dirk Kuyt.

United thought they had a consolation when Ronaldo curled one in past Alisson, only to be ruled offside – further adding to the hilarity.

The home side’s implosion continued when substitute Paul Pogba lasted less than 15 minutes, sent off for a high foot on Keita. Disgrace.

Keita was stretched off, meaning two of Liverpool’s three midfielders had been withdrawn due to injury.

From there it was a training game as the ecru-wearing Reds passed the ball around without any real intensity.

Liverpool have won back-to-back league games at Old Trafford for the first time since 2002. And they did it in style!