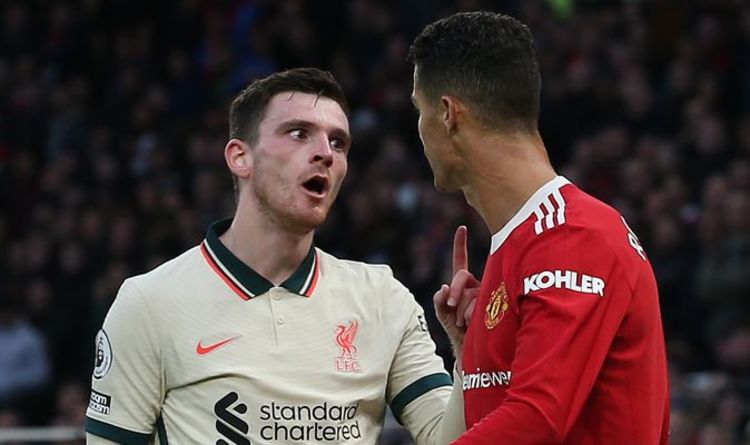 Andrew Robertson was spotted urging his Liverpool team-mates to 'keep going' and 'be ruthless' despite racking up a surprise five-goal lead over Manchester United after half-time on Sunday afternoon. The Reds were utterly dominant from the first whistle at Old Trafford, with Naby Keita and Diogo Jota firing the visitors into an early lead at the Theatre of Dreams.

Mohamed Salah went on to complete a stunning hat-trick with two goals before half-time and a third just minutes after the interval to put Liverpool in full control of proceedings.

The six-time European champions were at their brilliant best from the very first minute, with United a far cry from their usual selves even with Cristiano Ronaldo leading the line in attack.

However, the one-sided nature of the encounter did little to instil a sense of mercy within Liverpool's players as they looked to inflict further punishment on their bitter rivals.

Robertson was heard instructing his team-mates to keep piling on the pressure in search of more goals after Salah's third of the match, declaring: "Keep going, keep going, be ruthless!"

United's afternoon went from bad to worse during the second half, with Ronaldo seeing a consolation goal disallowed by VAR before Paul Pogba was sent off for a reckless challenge on Keita.

Robertson instructed his team-mates to avoid dropping off (Image: GETTY)

The eight-time Premier League title winner singled out Fred and Scott McTominay, who were chosen to start in the deep-lying midfield positions in front of United's back four.

The pair went on to experience plenty of difficulty in their attempts to keep the likes of Salah, Jota and Roberto Firmino at bay throughout the match.

"We know what McTominay and Fred give him [Solskjaer]," Neville told Sky Sports.

"Ole trusts them. It means he doesn't trust Paul Pogba or [Donny] van de Beek at this moment in time or [Nemanja] Matic.

"He still goes back to those two who have been the most reliable over the past two or three years.

"Only thing I would say is that obviously with all that talent on the bench, if you don't win with those two in midfield then where do you go from there?

"They were 2-1 down the other night [against Atalanta] when McTominay left the field and Pogba came on, so they still conceded chances the other night.

"I like McTominay and Fred, I just think they're limited in terms of what they can offer Manchester United in getting back to where they need to be."

We'll be bringing you the very latest updates, pictures and video on this breaking news story.
For the latest news and breaking news visit: express.co.uk/sport/football
Stay up to date with all the big headlines, pictures, analysis, opinion and video on the stories that matter to you.
Follow us on Twitter @DExpress_Sport - the official Daily Express & Express.co.uk Twitter account - providing real news in real time.
We're also on Facebook @DailyExpressSport - offering your must-see news, features, videos and pictures throughout the day to like, comment and share from the Daily Express, Sunday Express and Express.co.uk.