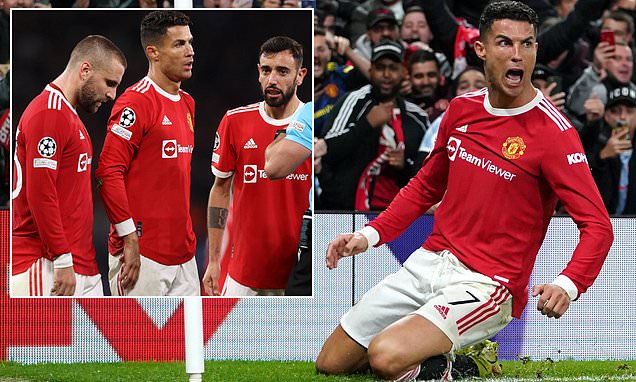 A furious Cristiano Ronaldo reportedly let loose during Manchester United's recent half-time interval against Atalanta and gave his new team-mates both barrels in a verbal tirade.

United made a shock start to the Champions League home fixture and quickly found themselves 2-0 behind at Old Trafford, much to Ronaldo's fury.

The Portuguese talisman took the responsibility upon his old shoulders and, according to the Sun, set about grilling his team-mates at half-time and demanding to know whether or not they were ashamed by the opening 45 minutes.

'Cristiano addressed the whole team and told them that the performance was unacceptable,' a United source reportedly told the Sun.


'He asked if they were not ashamed and said this was not how Manchester United perform in front of their own fans.

'He told them they needed to win the game and, if they didn’t, they might not qualify for the next stage of the Champions League.'

Manager Ole Gunnar Solskjaer, who is now under increasing pressure to retain his position at the helm, was then said to have taken over and added his insight, the source claims.

The Norwegian reportedly told his men that the game was still to be won if they played as a team and got the first goal in the second half.

Ronaldo's reported words seemed to have the desired effect overall, after United managed to peg back their opponents in the second half and grab the three goals needed to win the match.

The Red Devils hit three to go top of Group F — with Ronaldo getting the headed winner in the 81st minute and causing scenes of euphoria under the Old Trafford lights as a result.

Marcus Rashford and Harry Maguire respectively scored the other goals United needed to take all three points from the Italians.

The Red Devils now carry momentum into their crunch weekend fixture against arch rivals Liverpool, as they welcome Jurgen Klopp's undefeated side to Manchester.

Victory could see United jump into the top four positions in the Premier League, depending on other results.