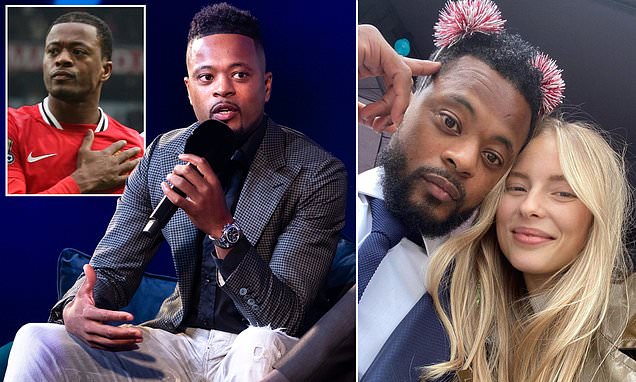 Manchester United legend Patrice Evra has opened up for the first time on his harrowing experience of being sexually abused by his teacher at the age of 13.

The Frenchman has stayed silent on the topic for his entire life, but while in the process of writing his autobiography decided to speak out in a bid to help others who have been through the same torment.

Evra speaks openly about the distressing situation, which occurred while he was living with the teacher, who had used his position of trust to offer him a spare room to help him cut down on the long commute to and from school.

In an extract from his new book, titled 'I Love This Game', Evra explains: 'The teacher, believing I'd gone to sleep, would put his hands under my bedcover and try to touch me. I knew what he was doing was wrong, so I tried to push him away and punch him... There were no words spoken in the dark, but he was touching himself and getting sexually excited by what was happening.


'On the last night at that man's house, when he knew that I was going back to my family, he finally succeeded. He put my penis in his mouth.

'Years later, when I was playing for Monaco, the police called me. Some kids had complained about this man and the police wanted to know if he'd ever tried to do something to me. Because I was famous and worried about the reaction, I lied and said no. They asked me if I was sure and I assured them I was. I have lived with that lie for many years. I can't tell you how much I regret that.'

Now 40, Evra has told the story in his autobiography to shed light on the situation and use his own position of power to spread the word that it is okay to speak out.

Incredibly, Evra only told his mother of the abuse two weeks ago, when he travelled back to France to make her aware before the release of the book.

In an interview with The Times, he explains: 'The first thing my mum says is, "if you don't sue him, I'll sue him. If he's still alive, I'm going to kill him." There is a lot of rage. I know my mum and people from my family will do research and see if they can sue. But I buried this thing so deep I didn't think about [prosecution].'

The presence of another woman in his life - fiancee Margaux Alexandra - has enabled him to be more open about his past though, and he explains that it is due to her that he has been able to put pen to paper and tell the harrowing story.

'I met a new woman and emotionally I am more open,' he says. 'She is my best friend, my soulmate, even my psychologist, she is an angel.

'Living with that was one of my biggest regrets because I could have helped so many people,' he adds. 'I've had enough of this toxic masculinity. For my father, crying was weak, but crying is not being weak.'

Evra was known as a joker in the dressing room during his career, but he was hiding a secret

Evra was well-known as a joker in the dressing room throughout his career - at Manchester United and beyond - but his autobiography is set to shed new light on him as a man and reveal stories never before heard.

With France, he achieved 81 caps and in 2009 he was voted into the FIFA FIFPro World XI.