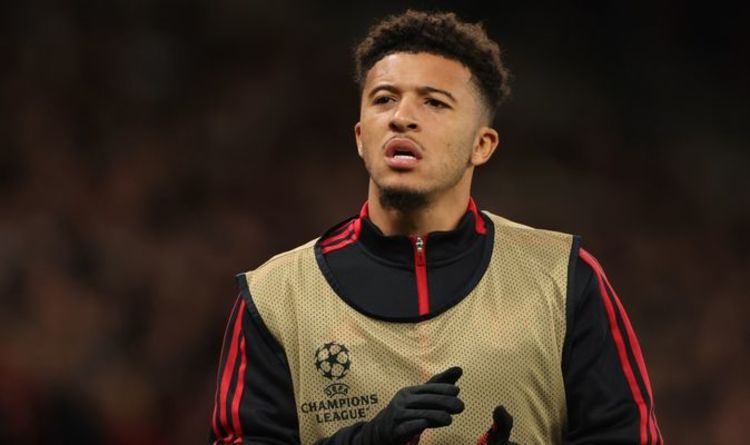 Former England goalkeeper Paul Robinson has warned Jadon Sancho that he could follow in the footsteps of Manchester United flop Memphis Depay if he cannot find his feet at Old Trafford over the coming weeks. The former Borussia Dortmund winger has struggled to live up to expectations for the Red Devils since joining the club on a long-term basis in the summer transfer window.

Sancho was a long-term target at United for a number of years but only made his highly-anticipated switch back in July, with Dortmund accepting a fee of around £77million for his services.

He established himself as one of Europe's most feared attackers during his time in the Bundesliga, chipping in with 16 goals and 20 assists in all competitions last season.

However, the 21-year-old has been unable to replicate his usual form since arriving at United and has often been forced to settle for a spot on the bench as a result.

Sancho is yet to provide a single competitive goal or assist for the Red Devils despite making 11 appearances for the club this season.

Robinson, who won 41 international caps for England over the course of his career, has suggested that Sancho's muted spell at United has thrown up shades of Depay and Wilfried Zaha, who both failed to make a lasting impression at Old Trafford.

Sancho has struggled in his first few months at United (Image: GETTY)

"Manchester United is a huge club and not everybody hits the ground running," Robinson told Football Insider."The truth of the matter is, it doesn’t work for some players. You only have to look at the likes of Wilfried Zaha and Memphis Depay.

"He needs to adapt his game. The pressure is huge at the best of times but now, with the pressure the manager is under… the results have not been good enough.

"It is a difficult situation for him at United right now. He is not playing well."

Depay arrived at United to plenty of fanfare in the summer of 2015 after impressing for PSV Eindhoven and the Netherlands, but was ultimately shipped out after an underwhelming 18-month spell at the club.

Meanwhile, Zaha was considered to be one of England's brightest young prospects when he joined from Crystal Palace in 2013 but failed to register a single United start before returning to the Eagles, where he has remained since.

It remains to be seen whether Sancho will be able to rescue his form of old at United, with the winger under contract until the summer of 2026.

Red Devils boss Ole Gunnar Solskjaer recently insisted that Sancho will have no problem in succeeding at Old Trafford, urging his critics to be patient as he adapts to life in the Premier League.

"Gareth [Southgate] has said it's important Jadon knows they believe in him," Solskjaer told reporters last month."They have invested time in him. He will be a top player, performances are going to come."He'll come good, we've got absolutely no worries."

Sancho will be hoping to open his account for United against Liverpool, who are yet to taste defeat in the Premier League this season, on Sunday afternoon.