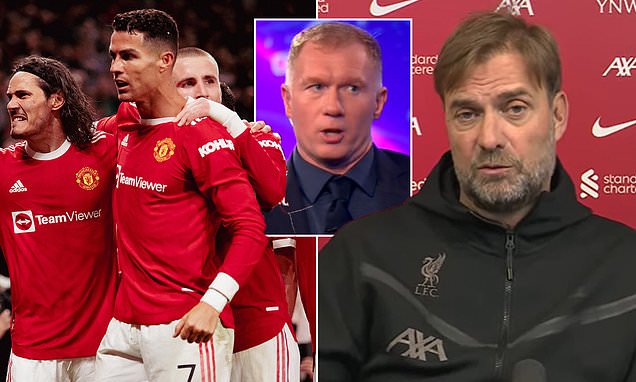 Jurgen Klopp has dismissed claims from Paul Scholes that he was 'rubbing his hands together' while watching Manchester United's 3-2 comeback win over Atalanta in the week.

Scholes delivered a fearful assessment of Ole Gunnar Solskjaer's side after they fought back from 2-0 down to beat the Serie A outfit in the Champions League with in-form Liverpool due to visit Old Trafford on Sunday.

But Liverpool boss Klopp insisted at his Friday press conference that United's win served to underline the danger they pose to his side.

United fought back from 2-0 down to win 3-2, with Cristiano Ronaldo scoring the winner

'There was not one second when I was rubbing my hands together, there was no reason for it,' Kopp explained.


'Atalanta caused United first half some problems but even in that half they had three clear cut chances.

'The second half was pure power presentation of United, they went for it with the quality they have and they can cause any team problems, especially if you stop playing football which Atalanta did a little bit.

'So no, I was not rubbing my hands. I prepare the time for a tough game against a really good opponent. We have been long enough together to know how important this game is.'

After a tepid first half display, goals from Marcus Rashford, Harry Maguire and Cristiano Ronaldo completed the United turnaround.

But Old Trafford legend Scholes was unimpressed by the overall standard of his old side.

'You celebrate every win, the first half really worried me, people say I am miserable, but I looked at that game thinking about Liverpool at the weekend and playing Manchester City [on November 6],' Scholes said on BT Sport.

'If you play two central midfielders against them, it'll be three or four-nil and you aren't coming back.

'It was great seeing all the shooting and crosses in second half, but that first half worried me. They showed great spirit but they conceded so many chances, quality players make sure you don't win that game. Will they play that well against Liverpool? I imagine Jurgen Klopp at home rubbing his hands together watching that first half.

'I get the United excitement, that first half put me off the second half, if they were playing a better side they would have been out of sight.

'They [Atalanta] had five players missing. I get the excitement, but the display was something I did not enjoy, it was worrying, it lacked unity and to me, can they go and play against against better teams like that? No.

'It was a great night but that first half was a major worry.

'For a neutral it was a great game, full of excitement and goals but I am being realistic about what is to come. I expect more from them, they cannot keep conceding chances like that. They were playing a decent team but not world class, you cannot get too carried away.'