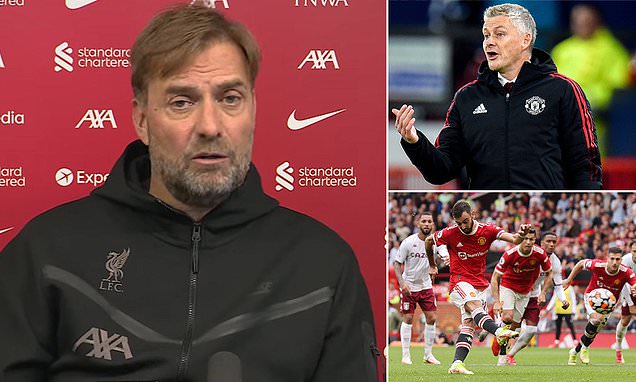 United boss Ole Gunnar Solskjaer accused Klopp last month of having an influence on the Red Devils receiving spot kicks this season, after missing out twice at West Ham.

However Liverpool boss Klopp, at his pre-match press conference ahead of Sunday's showdown at Old Trafford, insisted once more that United's 11 spot-kicks last season was a large amount - while playing down the dialogue between the two managers on the situation.

'I think that Ole said it, in between what I said and when Ole said it they had 5 penalties and we had two,' Klopp said.


'Come on, and we all know we cannot influence refs with things like that.But having the amount of penalties United had before that was quite exceptional.

'They are good, they go in the box, they have these kinds of situations but we have them as well and didn't get even a similar amount of penalties.'

'That's just facts. Who cares? It's done. Yeah, nothing else to say about it.'

Prior to the game against Aston Villa four weeks ago, Solskjaer said: 'A certain manager last year was starting to worry about us getting penalties and after that it seems like the decisions are more difficult to give.

'I've seen a big difference since then on. So leave it to the refs and make the right calls very soon.'

United did then receive a spot kick against Villa, but it was blazed over the bar by Bruno Fernandes in stoppage-time.

United have not been awarded a penalty in the weeks since, while Mohamed Salah scored Tuesday's winner for Liverpool against Atletico Madrid from the spot.

Plenty of eyes will be on referee Anthony Taylor should a contentious incident occur in the box this weekend.