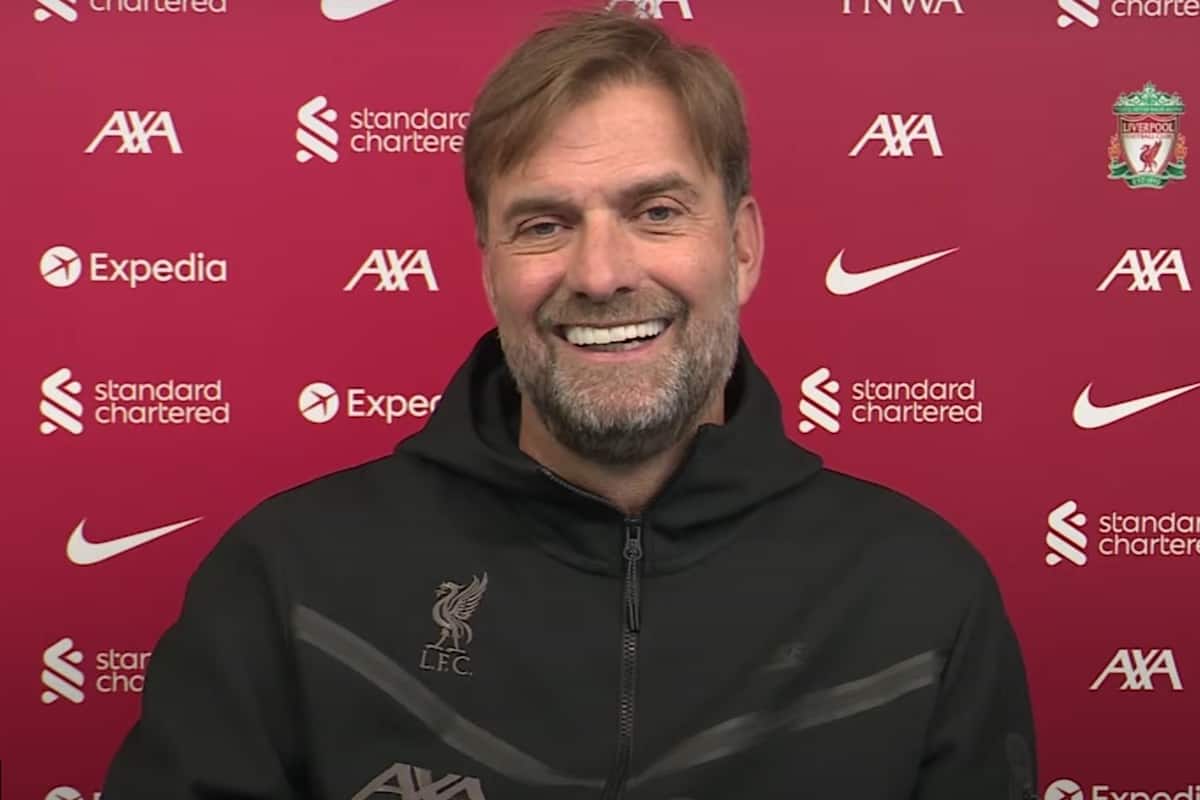 Jurgen Klopp was presented with multiple talking points ahead of Liverpool’s trip to Man United, including an injury update and comparisons of the world’s best players.

Here are four key things from Klopp’s press conference, which was held at Kirkby on Friday:

1. Thiago not close to a return

The No. 6 is to be absent for seven successive games when the trip to Old Trafford rolls around following a calf strain against Crystal Palace.

And while the manager confirmed he has started running, “a good sign” he is still unsure of if Thiago will return “before or after the international break.”

It’s frustrating to say the least as he continues to face one hurdle after another since he joined the club, and he could now miss a further four games should he fail to prove his fitness before the November international break.

But Curtis Jones will be in contention, however.

2. Why compare Salah and Ronaldo?

The current world’s best meets five-time Ballon d’Or winner on Sunday and while many eyes have been drawn to the battle in either final third, Klopp didn’t want to be drawn into a comparison.

“Why should we compare Salah and Ronaldo? Obviously, both are world-class players.

“Both pretty quick and desperate to score goals, but I never really thought properly about that.”

As the greats do, they’ll do their talking on the pitch.

Ole Gunnar Solskjaer’s side have needed to muster a comeback or two so far this season, including against Atalanta in mid-week and their second-half resets provide something for the Reds to ponder.

“I didn’t think yet what I will tell the boys but we all know how the world of football is,” Klopp said.

“United-Liverpool is a massive game and I think Man United are not overly happy with the results they got so far but we all know they are capable of incredible stuff.

“We try to focus mainly on ourselves…but I might mention that but it depends on the result obviously.”

A team talk at half-time at Atletico got the job done but the hope is one won’t be needed on Sunday.

Solskjaer has been quick to voice his dismay at United’s declining penalty numbers after Klopp called out the disparity back in January, but the boss is now eager to let it go.

“We all know, come on, that we cannot influence refs with things like that.

“But having the amount of penalties that United had before that was quite exceptional. They’re good, they go in the box and they have these kind of situations.

“But we have them as well and got not even a similar amount of penalties. That’s just facts, who cares, it’s done and nothing else to say about it.”

Question is, will the wound be reopened on Sunday?