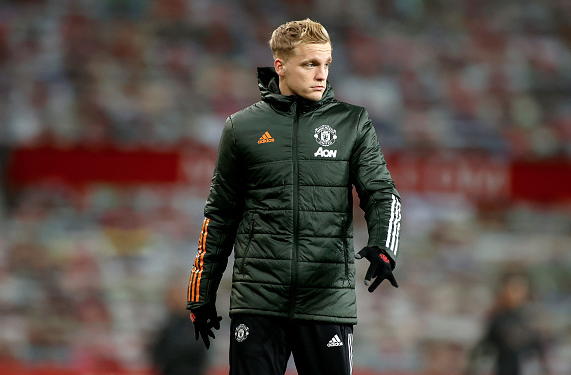 Donny van de Beek continues to find himself down the pecking order at Manchester United and his efforts to get a move away from Old Trafford in the summer were, as he and his agent saw it, blocked by the Red Devils.

The midfielder’s situation hasn’t improved since then, and he’s been restricted to only one appearance, which came in his side’s EFL Cup defeat to West Ham United.

Solskjaer this week insisted the Dutchman has to take his chances, when they’re presented to him. It’s not clear when the former Ajax man will get more chances, but he seems to be looking for a way out of United.

According to Defensa Central, the Netherlands international has asked his agent again to ‘take him to Real Madrid’. He was on Los Blancos’ agenda two years ago, but they decided against going ahead with the operation because Zinedine Zidane wasn’t convinced.

Van de Beek has now held talks with his representative to see if there is any chance to join the La Liga side in January.

He wants to try and get out on loan in order to rectify the mistake, most likely of joining United, and join Real Madrid to ‘fulfil his dream’ of playing for them.

The player’s arrival in Madrid seems complicated, but potential exists for Isco and Dani Ceballos could make them look for a new midfielder.

Defensa Central’s report states Van de Beek wants to join Real Madrid, but there isn’t anything to suggest Los Blancos will make an approach for him in January.