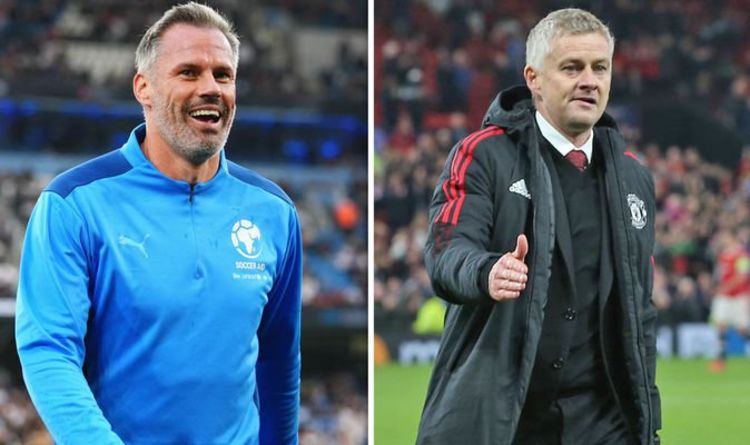 Jamie Carragher has responded to Manchester United boss Ole Gunnar Solskjaer following their recent exchange. The Norwegian is in the spotlight ahead of Sunday’s Premier League clash with Liverpool. And Carragher thinks he pales in comparison to Jurgen Klopp ahead of that match.

Speaking on Monday Night Football, he said: “Ole Gunnar Solskjaer will not win a league title or Champions League trophy as Manchester United manager. He is not at the level of the other managers — in terms of Jurgen Klopp, Thomas Tuchel or Pep Guardiola.

“They’ve got years of experience behind them in terms of winning big trophies. Ole hasn’t got that.

“Manchester United will only win maybe the FA Cup or the Europa League. If he won one of them, for me, that would make no difference.

“That’s not a criticism of Ole but they need a manager who can compete with the other managers in this league.

“Tuchel came in at Chelsea with three at the back. At the start of the season the talk was of Solskjaer perhaps moving to 4-3-3. He’d never done that before and it was like, ‘Where’s that come from?’.

“I like to listen to the managers talk after games. If I watch Chelsea, I’ll want to listen to what Tuchel has to say after it because I could take something from it. Klopp, Guardiola, it’s the same.

“You feel like you’re learning something or are being educated. They may break the game down.

“Brendan Rodgers did that after Leicester’s victory over United last weekend. They know what the plan is and they know exactly why it has or hasn’t worked.

“When Solskjaer speaks after games, it’s all about ‘the Man United way’. But what’s the Ole way?”

Carragher also admitted that Liverpool will be worried about the impact the Old Trafford crowd could have on United.

“It felt like the wagons were circling on Wednesday and United reacted as big clubs often do in such circumstances,” he said.

“It doesn’t mean United are any closer to doing anything meaningful in the grander scheme of things but it’s that feeling of believing the world is against you.

“I’ve been there as a player. I remember in 2009 we’d lost four on the bounce and faced United at Anfield a few days after losing at home to Lyon in the Champions League.

“Everyone was getting after us at the time but we won 2-0 and I think that will be the worry for Liverpool this weekend.

“That the Old Trafford crowd really get behind their team again and the players have that ‘We’ll show you’ attitude.

“It’s all about the here and now. Whatever the result, though, Solskjaer is not suddenly going to emerge at Klopp’s level. As I know only too well, there’s nothing he can do about that.”