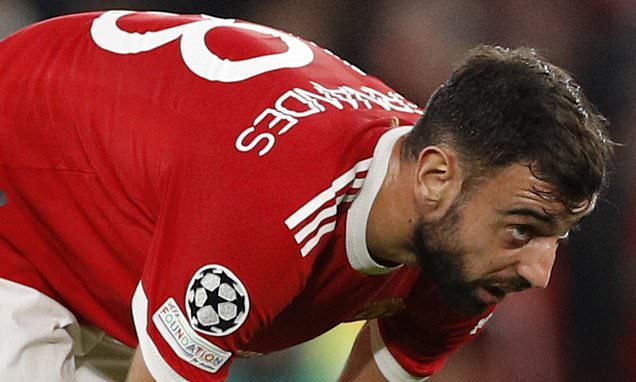 Manchester United have been left sweating over the fitness of Bruno Fernandes as they prepare to face Liverpool at Old Trafford on Sunday.

According to The Sun, Portugal star Fernandes was 'limping heavily' after turning up for a warm down session following United's 3-2 comeback victory against Atalanta in the Champions League on Wednesday night.

It would be a huge blow for United if the 27-year-old was out of Sunday's clash against Jurgen Klopp's men.

United are winless in their last three Premier League matches and the narrow triumph over Atalanta has done little to cool the intensifying scrutiny over Ole Gunnar Solskjaer and his position as United manager.


United were two goals down to Atalanta at half-time before strikes from Marcus Rashford, Harry Maguire and Cristiano Ronaldo turned things around in the second half.

But Solskjaer will know his side will have to be far better against Liverpool and the potential absence of Fernandes would represent a huge blow.

Liverpool defeated Atletico Madrid 3-2 at the Wanda Metropolitano in midweek and sit second in the Premier League standings, a point behind leaders Chelsea.

If United are beaten by Liverpool on Sunday, they would fall seven points behind their fierce rivals with just nine league matches gone.

Fernandes has scored four goals in 12 appearances in all competitions for United so far this season.

Solskjaer also has concerns over Marcus Rashford, who got a dead leg against the Italian side, but believes he will be passed fit for Sunday.

Arsene Wenger was impressed by Fernandes in United's victory against Atalanta

'And when Pogba came on Fernandes became better. Fernandes had a poor first half, but in the second half he came alive as well.'

And regarding Fred's contribution, Wenger added: 'I would personally highlight the second half for Fred.

'Fred saved a few crosses in the box, defensively outstanding and he worked unbelievably hard in the second half.'