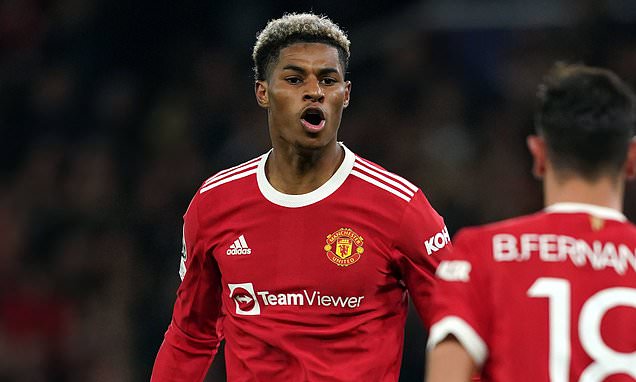 Marcus Rashford is hopeful of being fit to play for Manchester United in Sunday's clash with arch rivals Liverpool at Old Trafford.

Rashford went off during United's win over Atalanta in the Champions League on Wednesday night with what manager Ole Gunnar Solskjaer described as a dead leg.

The England striker had treatment at Carrington on Thursday morning and it's understood he is optimistic of being cleared to face Jurgen Klopp's side.

The England striker, 23, had treatment after going off during United's win over Atalanta

Rashford has only just returned following shoulder surgery in the summer and scored on both appearances so far in last weekend's defeat at Leicester and against Atalanta as he began United's dramatic comeback in a 3-2 win over the Italians.


Solskjaer will be even more anxious to have Rashford available for Sunday considering the player's impressive record of five goals in his last eight games against Liverpool.

Speaking about the injury on Wednesday night, the United boss said: 'It's a dead leg. I hope he'll be okay for Sunday. I hope so and I think so. It can take longer than you want, but if we treat him well he should be okay.'

Rashford added 4kg of muscle on the lower half of his body during his rehabilitation, but was limited in the work he could do on the upper half because of the operation on his left shoulder.

United want him to bulk up to balance that out and also to protect his body against further injury in future.

Solskjaer added: 'He has worked really hard. His injury, or the surgery, meant he couldn't train with contact but he has been training physically and now he is physically very robust. Now it's about getting football form back, and it's coming.

'Marcus is a natural talent but he also wants to work on his game and he has already worked a lot individually without contact allowed. It showed (against Atalanta) because he was really composed and took his goal really well.'