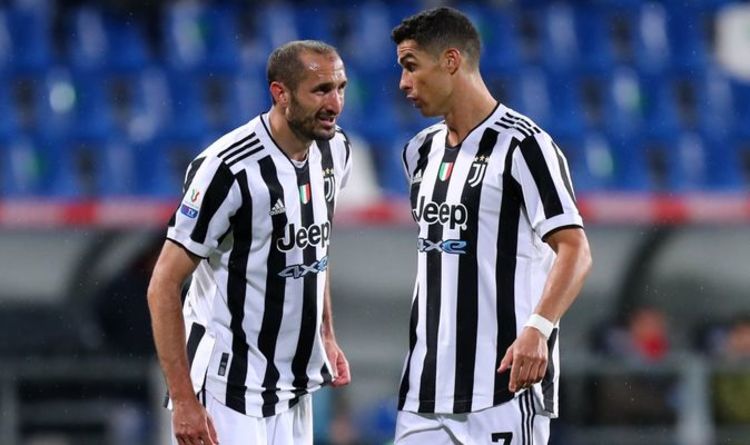 Juventus central defender Giorgio Chiellini believes it would have been “better” for the club if Cristiano Ronaldo had departed the Italian giants earlier. Ronaldo departed Massimiliano Allegri’s side abruptly at the end of August to seal a remarkable return to Manchester United.

While supporters of the Red Devils revelled in the return of the player who departed the club for £80m eleven years previously, the Bianconeri were left feeling like the rug had been pulled out from under them.

The five-time Champions League winner not only spent the pre-season with the Italian giants, he also came on from the bench in their opening Serie A match against Udinese.

At one point, it had appeared he had committed his future to the club after hitting out at “disrespectful” and “frivolous” speculation which had linked him with moves to Manchester City, Paris Saint-Germain, and Real Madrid.

However, ten days later, he left Turin and returned to the red half of Manchester. And Juventus’ defensive icon Chiellini believes the way he departed the club was extremely unhelpful.

Giorgio Chiellini was not happy by the manner in which Cristiano Ronaldo left the club (Image: GETTY)

And Juventus’ defensive icon Chiellini believes the way he departed the club was extremely unhelpful.

“He left on August 28th,” Chiellini said in an interview with DAZN cited by MARCA.

“I’m sure it would have been better for us if he had left earlier. It’s something we paid for.”

Juventus paid Real Madrid £101m to prise Ronaldo away from the Bernabeu in the 2018-19 season.

Ronaldo's accumulated transfer fees means he is the third most expensive footballer ever (Image: EXPRESS SPORT)Cristiano Ronaldo headed the winning goal for Manchester United in their 3-2 win against Atalanta (Image: GETTY)