This one goes out to Fred
MUFC Official Site 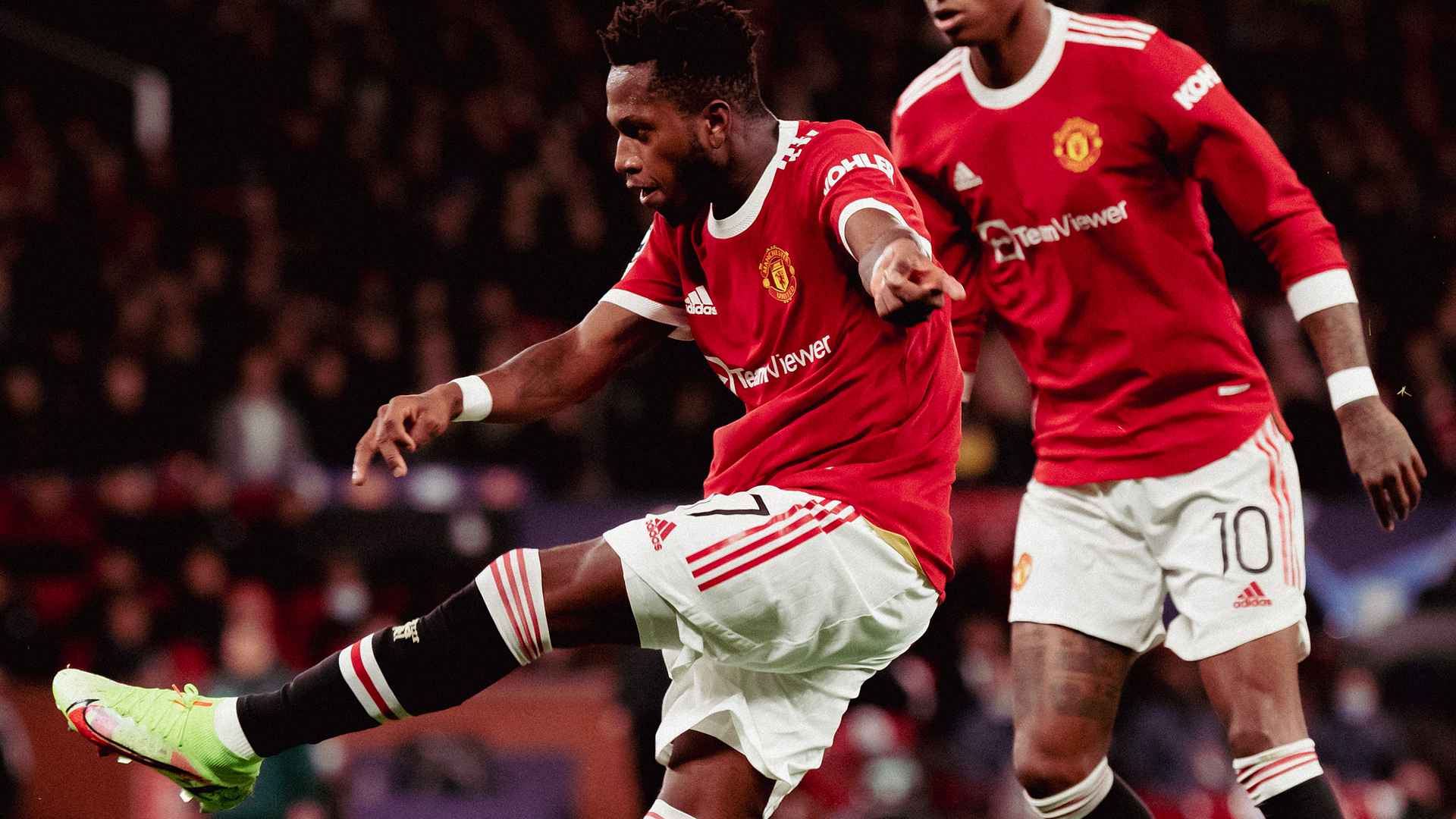 On Wednesday evening, Manchester United rallied together to turn a two-goal deficit into a thrilling 3-2 win over Atalanta at Old Trafford.

And in the aftermath of our latest special European night under the Old Trafford floodlights, it is no surprise to see a certain Cristiano Ronaldo among the majority of the headlines.

Our Portuguese superstar stooped superbly to head home the winning goal with just under 10 minutes left on the clock in M16, to complete a comeback that had been started earlier in the second period, by goals from the recently returned Marcus Rashford and captain Harry Maguire. That trio of moments were of course key in determining the outcome, but it was a result that was contributed to across the board. As if often the case following a team effort, there can be several more unsung heroes. Bruno Fernandes was credited as UEFA’s Man of the Match for a performance in which he set up two of the goals on his way to creating the most chances by a United player in a Champions League match since the 2003/04 season (8).  Meanwhile, David De Gea made a vital double save to deny substitutes Duvan Zapata and Ruslan Malinovskiy late on, while the score was at 1-2.

Both proved instrumental in the making of an important three points that took us top of Group F after three matchdays, as did the performance of Fred.

Our no.17 may not have produced his own highlight reel of extravagant moments that you will have been watching on loop throughout Thursday morning, but he has quietly been the subject of some praise for his contribution to the win against Atalanta, and rightly so. The Brazilian was a key cog in United’s wheel against the Italian side, and played a particularly integral role in our quest to come from behind after half-time. Featuring as part of a midfield two, our no.17 often sat as the deeper of the duo, occupying the role of a sweeper in the second half, allowing the likes of Aaron Wan-Bissaka, Luke Shaw and his partner Scott McTominay to make dangerous bursts forward from deep, in order to create overloads and chances in the final third.

His mobility and ability to read the game from this position also gave United's front four the freedom and licence to keep attacking in pursuit of the three goals. Gian Piero Gasperini’s Atalanta are known to swiftly attack and break lines, and they made no secret about wanting to finish the game off with a third goal via this on Wednesday evening.

But our no.17 regularly accounted for this threat, ensuring no more work extra work for the Reds to overhaul. The midfielder won the ball back from every one of his three tackles made, while completing two interceptions and one clearance.

And his contributions weren’t just vital in the defensive phase of United’s performance, as he played his part going forward too. The 28-year-old took up a quarterback-like role for the Reds, continuing to swiftly observe the Italian side's defensive setup before distributing the ball to his team-mates. He completed 45 of 56 attempted passes on the evening with five of his six long balls being successful.

This was specifically key against Atalanta again, due to the high intensity they play with out of possession, while his accuracy only further underlines a relentless nature that sees him always striving to help the team as much as he can.

In a recent interview with our monthly magazine, Inside United, the midfielder spoke about how his passing was the one thing that he was keen to ensure that he improved on, saying, "I aim to improve and work a lot after training on my passing. Sometimes turning in the midfield, things more specific to my position.

“As I've said before, my objective is to get the ball to the forwards, to always be ready to receive the ball from the centre-backs, receive a pass and have the right body position to control it and find a good pass. “I aim to improve in this area, this is the most important area to improve and develop in my position. I visualise this every day so I look to improve on positioning on the pitch, an additional pass, turns during a game, that's what I look to work on every day." It may seem standard for a midfielder to strive to work on this, but it is these intricacies that can often allow players to make a subtle difference in a game, as you can argue Fred did on Wednesday night. He was unlucky not to cap off his showing with at least one goal too, seeing a close-range effort saved in the first half by Atalanta goalkeeper Juan Musso, before curling just wide of the posts on his weaker foot, moments before the break.

Off the basis of the above quotes, one would not be surprised if he is keen to work on his finishing after training either, even if it isn’t among his main roles in the team. It is the kind of character he comes across as.

Fred was visibly disappointed not to have found the target with an effort just before half-time.

Perhaps more familiarly to his game however is his relentless energy and you could say that was perhaps more apparent than ever during Wednesday’s game.  Following the defeat at Leicester last weekend, a match Fred missed following his later return from international duty with Brazil, Ole Gunnar Solskjaer called for more intensity going into Wednesday evening’s game.  The midfielder certainly provided that on his return to the XI during the midweek outing and although it is easy to say in hindsight, his presence was potentially something that was missed at the King Power Stadium on Saturday. His absence in the loss to the Foxes isn’t the first time the Reds haven't quite clicked without him, with last season’s Europa League final being another example of that.  Since signing for United in the summer of 2018, he may not have always been a player widely praised, but one thing is for sure is that he is an important player for Solskjaer's side. And just like the boss did in his own playing days, Fred displays enthusiasm, passion and a determination to give his best every time he pulls on the United shirt. That’s one thing you can never knock him for.

Speaking of international football, his recent emergence for Brazil, and role in helping his nation get to the final of the Copa America can be no coincidence, and his relentless persona means he deserves every bit of recognition received lately on both the club and international stage.

Following last night’s win, United fans warmly showed their appreciation for our no.17, including on social media, as you can see below.

David Campion: “Fred played very well and he should have had two goals. Hopefully he will bring that energy on Sunday.”

Vicky Lea Cooke: "He played well and gave us lots of energy in midfield which we really lacked against Leicester."

Enow Henry: "He is a hard worker, I love him to the moon and back.” Our fans haven’t been alone in their praise of Fred’s most recent showing either. Former Arsenal manager Arsene Wenger was vocal in his approval of the Brazilian’s work against the Serie A club, while working as a pundit on Wednesday evening.  He said: "I would personally highlight the second half of Fred. Fred saved a few crosses in the box.  “Defensively he was outstanding, and he worked unbelievably hard in the second half."

After the match, Fred himself went on to express his own delight at proceedings, posting on social media: “Old Trafford. Champions League. Emotions. What a night! What a victory!”

Old Trafford. Champions League. Emotions. What a night! What a victory! pic.twitter.com/qzW6QH4e4E

If there was a drawback from the evening, it that was that he had to make a slightly premature ending to his outing, with a hobbling exit from the pitch on 88 minutes. It remains unknown whether the midfielder will be available for this weekend’s clash with Liverpool but if he was to be, you would have to think that he would be in line to be an integral part of United’s game plan once again, given the energy and responsibility he would look to provide once more in such a fixture.

With that in mind, we’ve got our fingers crossed, and praying it’s nothing too serious for Pastor Fred!

The opinions in this story are personal to the author and do not necessarily reflect the views of Manchester United Football Club.