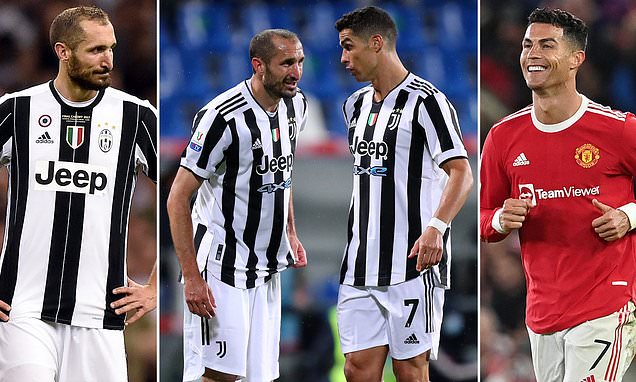 Giorgio Chiellini has hit out at Cristiano Ronaldo for deciding to join Manchester United very late in the summer transfer window and claims Juventus 'paid for it' in lost points at the start of the season.

Ronaldo started the season with the Old Lady, the club where he had spent the last three seasons, but decided to rejoin former club United in the final week of August for a £19.7million transfer fee.

Chiellini's Juventus started the season poorly with no wins in their first four league games and the Italian defender admitted that Ronaldo's departure affected that, before claiming the Portuguese forward should have quit at the start of August.

Ronaldo completed a £19.7m million return to Manchester United in the last week of August

The centre-back told DAZN: 'We had reached a point in the relationship where Cristiano needed new incentives and a new team that could play for him, because when he finds such a team he is decisive.


'He has been proving it in recent months and showed it in the three years that he was with us.

'A rejuvenation restart programme grew here at Juventus. If Ronaldo had stayed, it would have been an added value and we would have gladly exploited it, but he might be thinking more about the present than the future.

Chiellini claims Juventus were shocked by Ronaldo's exit, which cost them points in Serie A

'He left on August 28th, it would have been better for us if he had left earlier. It's something we paid for, there's a little shock in it for you and in my opinion we paid for it in terms of points.

'Had he gone away on August 1st, we would have had time to prepare better.'

Juventus appear to have overcome the shock of Ronaldo's departure, with Massimiliano Allegri's side picking up six straight wins in all competitions, including three wins from three in the Champions League.

Ronaldo, meanwhile, has also started his second dawn at Manchester United strongly with six goals in eight matches since his Old Trafford return, including strikes in all three of the Red Devils' European group stage matches.

The Portuguese forward has been criticised for United's recent form, which has seen them fail to win their last three Premier League games, due to question marks over whether he can press efficiently.

'If anyone wants to criticise him for his work rate or attitude, just watch this game, watch how he runs around – he's great in front of goal,' said Solskjaer.

'I was really pleased with how he led the line. We asked him to run the channels and press more. We were at home and we wanted to get the crowd behind us.

'He did everything a centre-forward should do, leading the line and defending. The goal is just what he does better than most.'

Ronaldo enjoyed three successful years at Juventus, winning the Serie A title in 2019 and 2020 and ending both those seasons as the Italian top-flight's Footballer of the Year.

He also finished as Serie A's top goalscorer last season with 29 goals last season but the Old Lady missed out on the Scudetto to Inter Milan, while Ronaldo also failed to win the Champions League in his three seasons in Turin.